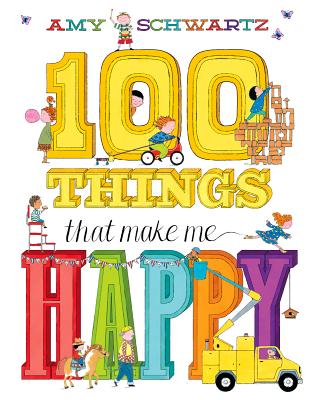 100 Things That Make Me Happy

Praise For 100 Things That Make Me Happy…

**STARRED REVIEW**
"It is a book chock-full of fun—what more could one want?"
— Kirkus Reviews

**STARRED REVIEW**
"The tightly rendered illustrations, which usually appear in twos or three against white backgrounds, have a refreshing emotional reticence; the kids' happiness is shown as matter-of-fact and grounded rather than euphoric or manic. And then there are the descriptions themselves, eloquent in their unfussiness...Schwartz isn't the first to try a compendium of this sort, but she sets a new benchmark."
— Publishers Weekly

"Schwartz’s distinctive pictures in brilliant colors would make anyone happy...a magical romp through the senses and delights of being human."
— Booklist

"It’s all very, very sweet, but with the occasional offbeat example that will satisfy out-of-the-box thinkers."
— The Horn Book Magazine

Amy Schwartz has written a number of award-winning picture books. She has created two New York Times Best Illustrated Children’s Books of the Year and a Publishers Weekly Best Book of the Year. She has won the Christopher Award, the Charlotte Zolotow Award, and the National Jewish Book Award, among others. Amy was born and raised in California, and now lives with her family in Brooklyn.
Loading...
or support indie stores by buying on