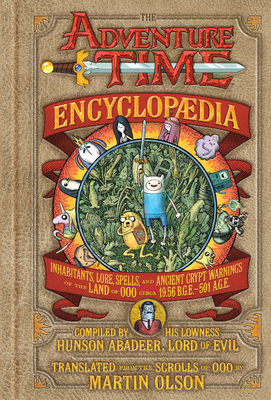 What time is it? Adventure Time™! Explore the magical world of Ooo with Jake the Dog and Finn the Human, along with the Ice King, Princess Bubblegum, Marceline the Vampire Queen, and all your favorite Adventure Time characters, in this New York Times bestselling companion book to Cartoon Network’s hit animated series.

Written and compiled by the Lord of Evil himself, The Adventure Time Encyclopaedia matches the playful, subversive tone of the television series, detailing everything anyone will ever need to know about the postapocalyptic land of Ooo and its inhabitants—secret lore and spells, fun places you should visit and places where you will probably die, whom to marry and whom not to marry, how to make friends and destroy your enemies—plus hand-written marginalia by Finn, Jake, and Marceline.

An indispensable guide to the show fans love to watch, this side-splittingly funny love letter to Adventure Time is sure to appeal to readers of all ages. Heck yeah!

From the Back Cover:

Written by the Lord of Evil Himself, Hunson Abadeer (a.k.a. Marceline the Vampire Queen's dad), to instruct and confound the demonic citizenry of the Nightosphere, The Adventure Time Encyclopaedia is perhaps the most dangerous book in history. Although seemingly a guidebook to the Land of Ooo and its postapocalyptic inhabitants, it is in fact an amusing nightmare of literary pitfalls, bombastic brain-boggles, and ancient texts designed to drive the reader mad.

Complete with secret lore and wizard spells, fun places you should visit and places where you will probably die, advice on whom to marry and whom not to marry, and how to make friends and destroy your enemies, this volume includes hand-written marginalia by Finn, Jake, and Marceline.

Arguably the greatest encyclopaedia ever written since the beginning of the cosmos, it is also an indispensable companion to humans and demons who know what time it is: Adventure Time!

Praise For The Adventure Time Encyclopaedia (Encyclopedia): Inhabitants, Lore, Spells, and Ancient Crypt Warnings of the Land of Ooo Circa 19.56 B.G.E. - 501 A.G.E.…

Even if you’re an adult Adventure Time fan, the book will make you feel like you’re 10 again.
— USA Today's Daily Candy

The brand-new Adventure Time Encyclopaedia will tell viewers everything they need to know about the post-apocalyptic magical land and its inhabitants.
— Entertainment Weekly's Family Room

The . . . Encyclopaedia will appeal to Adventure Time fans who want to delve deeper into the show’s mysterious back story and bizarre details.
— Los Angeles Times' Hero Complex

Martin Olson is a comedy writer, television producer, stage director, and composer. He voices the Lord of Evil, Hunson Abadeer, on the Adventure Time television series. Olson is best known as a “founding father” of the Boston comedy scene, and he has received an Emmy nomination and Ace Award for television writing. He lives in Los Angeles.