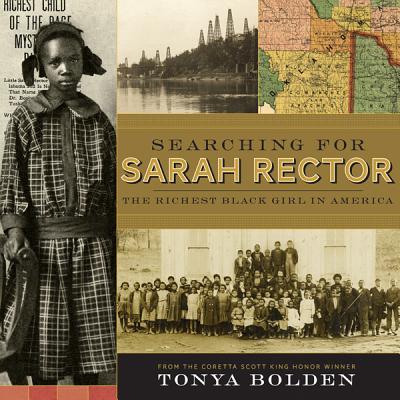 The Richest Black Girl in America

Searching for Sarah Rector brings to light the intriguing mystery of Sarah Rector, who was born into an impoverished family in 1902 in Indian Territory and later was famously hailed by the Chicago Defender as “the wealthiest colored girl in the world.”

Author Tonya Bolden sets Rector’s rags-to-riches tale against the backdrop of American history, including the creation of Indian Territory; the making of Oklahoma, with its Black towns and boomtowns; and the wild behavior of many greedy and corrupt adults.

At the age of eleven, Sarah was a very rich young girl. Even so, she was powerless . . . helpless in the whirlwind of drama—and danger—that swirled around her. Then one day word came that she had disappeared.

This is her story, and the story of other children like her, filled with ups and downs, bizarre goings-on, and a heap of crimes.

Out of a trove of primary documents, including court and census records, as well as interviews with family members, Bolden painstakingly pieces together the events of Sarah’s life.

Praise For Searching for Sarah Rector: The Richest Black Girl in America…

**STARRED REVIEW**
"This handsome volume with its many photographs is carefully sourced and has a helpful glossary, illustration credits and index. Bolden admirably tells a complex story while modeling outstanding research strategy, as her insightful author's note attests."
— Kirkus Reviews, starred review

"Bolden's remarks on tracking down Sarah's story will appeal to those who enjoy untangling historical mysteries."
— The Bulletin of the Center for Children's Books

Tonya Bolden has written numerous bestselling books for children and adults, and her work has garnered many awards, including the Coretta Scott King Honor, James Madison Book Award, School Library Journal Best Book of the Year, and YALSA Best Book of the Year. She lives in New York City. Visit tonyaboldenbooks.com.
Loading...
or support indie stores by buying on