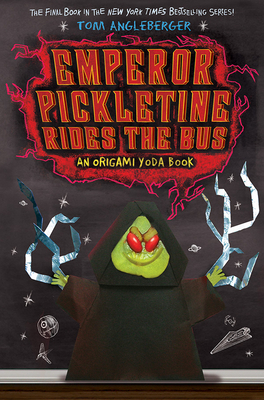 A field trip without origami? What the Hutt?

The Origami Rebel Alliance is off to Washington, D.C.! But there's a hitch. Principal Rabbski has banned origami. Without the Jedi-wise advice of Origami Yoda, how will Tommy and the gang navigate the serious drama of a class trip?

The final battle between the forces of good and evil at McQuarrie has everything: Twists! Snacks! Secrets! But who is keeping the biggest secret of all? Origami Yoda himself, and it's a shocker!

Includes instructions for folding your own origami.

"Angleberger closes his six-plus-volume (there is a companion origami manual with stories) series of doodle-filled Star Wars paeans with an enjoyable, funny and realistic denouement that nicely wraps up most of the series storylines. Age-appropriate boy-girl relationships add to the authenticity of the characters, who will soon be eighth graders. One last time: "stooky!" (Er, "fantastic!")"
— Kirkus Reviews