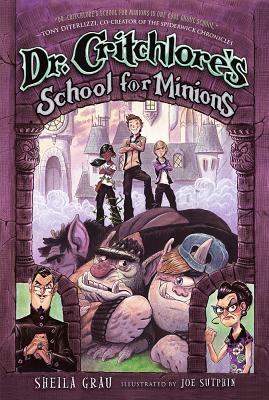 Welcome to Dr. Critchlore’s School for Minions, the premier trainer of minions for Evil Overlords everywhere. No student is prouder to be at Dr. Critchlore’s than Runt Higgins, a twelve-year-old werewolf. (At least he thinks he’s twelve. He was abandoned at the school as a baby, so he can’t say for sure.) Runt loves everything about Dr. Critchlore’s. He loves his classes—like History of Henchmen and Introduction to Explosives. He loves his friends—like Darthin the gargoyle and Syke the tree nymph. And he loves his foster family, who took him in when his wolf pack couldn’t.
But not everyone loves Dr. Critchlore’s as much as Runt. After a series of disasters, each worse than the next, it’s clear that someone is trying to shut the school down. It’s up to Runt, who knows the place better than anybody, to figure out who’s behind the attacks . . . and to save his home, and Dr. Critchlore himself, from total destruction.


Praise for Dr. Critchlore’s School for Minions
“An Addams Family for a new generation, filled with bizarre, peculiar, and sometimes downright silly characters. Readers, whether evil or not, are going to love the imaginative world that is Dr. Critchlore’s.” —Michael Buckley, bestselling author of the NERDS and Sisters Grimm series

“Werewolves, minions, evil overlords, junior henchmen, AND terrifying girl explorers. Dr. Critchlore’s School for Minions has got it covered. Clever and funny. I laughed throughout!” —Andrea Beaty, author of Attack of the Fluffy Bunnies and the bestselling Rosie Revere, Engineer

"Dr. Critchlore's School for Minions is one cool ghoul school, but behind the monstrous mayhem and creepy, comedic antics is a heartfelt theme of friendship. Evil Overlords need not force their minions to enjoy this spooktacular romp!" —Tony DiTerlizzi, co-creator of The Spiderwick Chronicles

“A droll addition to the magical school genre, worthy of a seat toward the front of the (Harry) Potter-wagon.” —Kirkus Reviews

Sheila Grau is the author of the Dr. Critchlore’s School for Minions series and The Boy with 17 Senses. She lives in California with her husband and four children.

Joe Sutphin is the illustrator of the Dr. Critchlore’s School for Minions series. He lives with his wife and cat in a big red barn in Ohio.

"A droll addition to the magical school genre, worthy of a seat toward the front of the (Harry) Potter-wagon."
— Kirkus Reviews

"In her debut, Grau introduces a contemporary fantasy world that is a perfect blend of Hogwarts and Monster’s University."
— Taylor Worley, Springfield Public Library, OR

"Runt's hapless attempts to do the right thing make him easily relatable amid themes of conquering self-doubt, wrestling with perfectionism ..., and searching for a place to belong, whether it's with a family bound by blood or one created in a lab."
— Publishers Weekly

"Grau carefully develops all her characters, and this rich cast helps to establish the setting as much as the descriptions of the school itself....Boarding school fantasy fans will flock to this new series, and it is refreshing to see one that features such a kind, amiable protagonist."
— The Bulletin of the Center for Children's Books
or
Not Currently Available for Direct Purchase
Copyright © 2020 American Booksellers Association