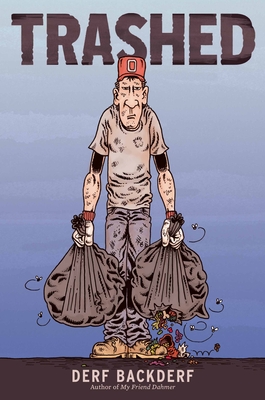 Derf Backderf has been nominated for two Eisner Awards and has received a host of honors, including the prestigious Robert F. Kennedy Journalism Award for political cartooning. His weekly comic strip, The City, has appeared in more than 100 newspapers over the past 22 years. Backderf lives in Cleveland, Ohio.

“A downbeat but entertaining ode to the odiferous realities of getting by.”
— Publishers Weekly (starred review)

“Backderf’s (My Friend Dahmer) detailed and grimy art is perfect for this raucous piece of infotainment about the crappiest of necessary crap jobs.”
— Library Journal

“More than anything else, the book is funny, very funny. At times, it’s a laugh-out-loud kind of funny rarely found in graphic novels. It might even make you think.”
— The Cleveland Plain Dealer online

“The microcosm of Backderf’s humor-rich, coming-of-age story expands toward larger social and cultural themes, including the idea that ‘we all contribute to the staggering, never-ending accumulation of waste on this planet.’”
— Shelf Awareness (starred review)

“It’s all far more entertaining than it sounds, thanks to the likeability of J.B. and his at-loose-ends roommates . . . and Derf’s slightly off-kilter, pleasantly ungainly drawings.”
— Booklist

“Trashed is both entertaining and unnerving.”
— The A.V. Club