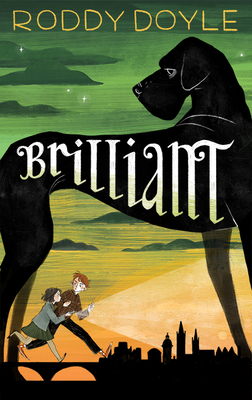 The Black Dog of Depression has descended over the adults of Dublin. Uncles are losing their businesses, dads won’t get out of bed, mothers no longer smile at their children. Siblings Raymond and Gloria have had enough and set out one night with one goal in mind: to stop the Black Dog, whatever it takes. In a chase through the streets and parks and beaches of Dublin, the children run after the Black Dog, and soon dozens, then hundreds, then thousands of kids join in their fight. They discover they have one weapon against the Black Dog. The weapon is a word: “brilliant.”

Illustrated throughout by a bright new talent and told through the masterful dialogue for which the acclaimed Roddy Doyle is known, Brilliant is a very special book with a storybook feel.

Roddy Doyle is an internationally acclaimed novelist, screenwriter, and playwright. In 1993 he won the Man Booker Prize for Paddy Clarke Ha Ha Ha. Doyle has also published many books for children, the most recent of which, A Greyhound of a Girl, was short-listed for the CILIP Carnegie Medal. He lives in Dublin.

Hawaii native Emily Hughes’s picture book debut, Wild, was on many “best of” lists for 2014.
Loading...
or
Not Currently Available for Direct Purchase