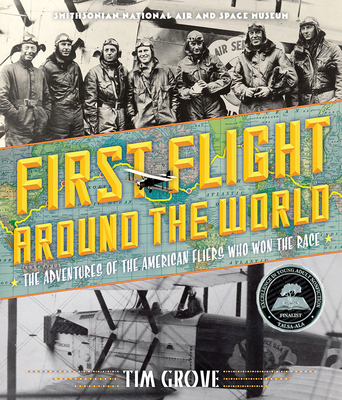 First Flight Around the World

The Adventures of the American Fliers Who Won the Race

A 2016 YALSA Award for Excellence in Nonfiction for Young Adults Finalist
In 1924 the U.S. Army sent eight young men on a bold attempt to be the first to circumnavigate the globe by flight. Men from five other countries—Great Britain, France, Portugal, Italy, and Argentina—had the same goal. The race was on!

First Flight Around the World documents the exciting journey of four American planes—the Chicago, Boston, New Orleans, and Seattle—and their crews on a race around the world. The trip held many challenges: extreme weather, tricky navigation, unfamiliar cultures, fragile planes, and few airfields. The
world fliers risked their lives for the sake of national pride.

Based in part on the journal of one of the crew members, First Lieutenant Leslie Arnold, along with commentary, newspaper reports, and archival images, First Flight Around the World is a captivating tale about American ingenuity, gumption, and perseverance.

Praise For First Flight Around the World: The Adventures of the American Fliers Who Won the Race…

"It's a grand tale, set handsomely here amid sheaves of maps, short journal passages and contemporary photos. A high spot in aviation history, particularly noteworthy for the rugged perseverance of those who achieved it."
— Kirkus Reviews

"Offering a look at a lesser-known historical event, this beautiful, well-written book is an essential addition for all collections."
— Patricia Ann Owens

STARRED REVIEW
"...a nonstop true action/adventure tale replete with crashes into mountains, mechanical failures over oceans, strandings and rescues, heartening incidents of international support and cooperation, and nerve-wracking moments of uncertainty fed by political conflict."
— The Bulletin of the Center for Children's Books

"The plethora of historical photos, maps, primary documents, and accounts from the flight crew about their experiences, laid out on eye-catching pages, help enliven the story of this incredible feat...kids interested in all things aviation related will likely be enthralled."

Tim Grove has written several books for young readers, including First Flight Around the World, a YALSA Excellence in Nonfiction finalist. He was formerly chief of museum learning at the Smithsonian National Air and Space Museum in Washington, DC. Visit timgrove.net.

The Smithsonian National Air and Space Museum in Washington, DC, maintains the largest collection of historic air- and spacecraft in the world, including the plane Chicago and a copy of First Lieutenant Leslie Arnold’s journal.
Loading...
or
Not Currently Available for Direct Purchase