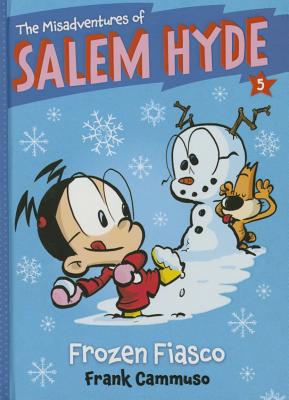 When Salem’s school puts on an ice pageant during winter break, our reluctant witch is determined to be a snow angel. But there’s one problem: Salem doesn’t know how to skate. So instead of preparing for the Frosty Follies, she’s stuck babysitting her neighbor’s son, Fergus. Just when Salem thinks her winter break is ruined, she’s offered the part of a snow angel. Now she just has to figure out how to balance her responsibilities and learn to skate before the big show. With a little magical help and some advice from the overanxious cat Whammy, Salem is sure she can get everything done . . . unless it all snowballs out of control first!

"Cammuso highlights his fun, black-and white art with shades of winter blue, and his humorous wordplay continues to be a delightful element of the series."
— Booklist

Frank Cammuso is an Eisner-nominated cartoonist, the creator of the popular middle school graphic novel series Knights of the Lunch Table, and the illustrator of several beginning reader graphic books, including Otto’s Orange Day. He lives in Syracuse, New York.
Loading...
or support indie stores by buying on