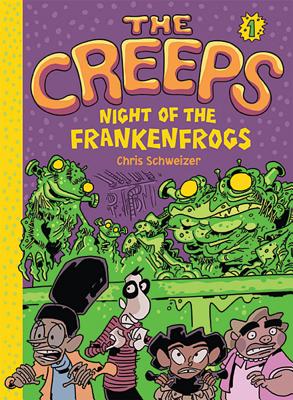 Book 1: Night of the Frankenfrogs

In Pumpkins County, weird things happen every day, but nobody ever makes a fuss. Nobody, that is, except the Creeps: Carol, a big-city girl new to Pumpkins County, who finds kindred spirits in Mitchell (monster expert), Jarvis (military brat with logistics know-how), and Rosario (girly girl on the outside, muscle underneath). The Creeps are on the case to figure out the spooky mysteries and still get to class on time. Last week it was a pudding monster. This week, it’s killer frogs—reanimated from the team’s biology class dissection experiment. Who’s behind the Frankenfrog attacks? The Creeps will track down the answers!

In this new creepy graphic novel series, Chris Schweizer’s art is full of the visual excitement that only the best graphic novel creators can pull off.

Chris Schweizer is the author/illustrator of the Crogan Adventures graphic novel series, which was nominated for two Eisner Awards and made the YALSA Great Graphic Novels for Teens list. He received his MFA from Savannah College of Art and Design. Schweizer lives in Madisonville, Kentucky, with his wife and daughter. www.chrisschweizer.com.
Loading...
or support indie stores by buying on
(This book is on backorder)