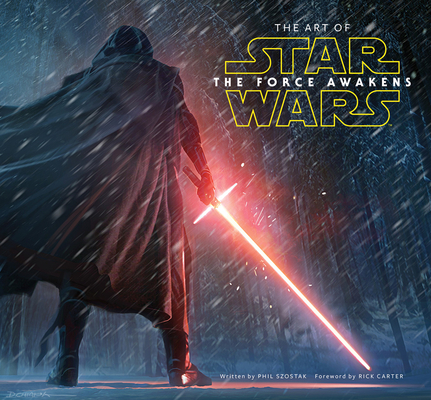 The Art of Star Wars

Praise For The Art of Star Wars: The Force Awakens…

“An incredibly in-depth look at all the alternate designs that could have ended up onscreen.”
— WIRED

“It’s gorgeous to look at and worth buying for that alone, but seeing so much preliminary concept art will just make you appreciate the finished product that much more.”
— StarWars.com

“The Art of Star Wars: The Force Awakens . . . is the rare art book that is actually worth going out and purchasing right now.”
— GeekTyrant

“An inside look at [the] evolution and tracks the record-breaking film from its early concept art to its finishing touches.”
— Yahoo! Tech

“It’s fascinating to look at some of the art that preceded the finished product.”
— Flavorwire

“Some of the best concept art and behind-the-scenes details have been collected in a book titled The Art of Star Wars: The Force Awakens.”
— ScreenRant

Image archivist Phil Szostak was embedded with The Force Awakens art department as a conceptual researcher and archivist from December 2012 through the end of production, and has worked in conjunction with Star Wars art departments for six years at Lucasfilm. A graduate of the School of Visual Arts in New York, Szostak worked for Wild Brain Animation on the Disney Channel series Higglytown Heroes, and he ran the JAK Films Art Department on Skywalker Ranch for over three years before joining the narrative design team on LucasArts' Star Wars: 1313. He resides in San Francisco.

Production designer Rick Carter has won two Academy Awards®: One for his design of Steven Spielberg’s Lincoln, and one for his otherworldly production design on James Cameron’s mega-hit Avatar. Carter received his first Oscar nomination for his work on Robert Zemeckis’s Forrest Gump, and an additional nomination for Steve Spielberg’s historic epic War Horse. Carter served as co-production designer for Star Wars: The Force Awakens, and is currently collaborating with Steven Spielberg on The BFG. He lives in Los Angeles.