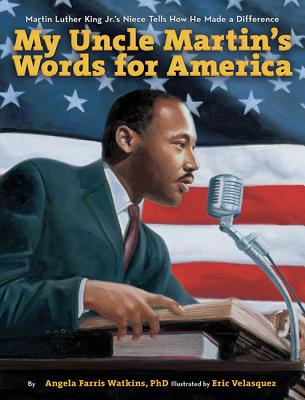 My Uncle Martin's Words for America

Martin Luther King Jr.'s Niece Tells How He Made a Difference

In this inspirational story about Martin Luther King Jr.—told from the perspective of his niece, Angela—readers learn how King used words of love and peace to effectively fight for African Americans’ civil rights.

The book focuses on words and phrases from King’s speeches, such as justice, freedom and equality.

Angela Farris Watkins, PhD demonstrates the importance of her uncle’s language in bringing about changes during the Civil Rights Movement, from his “I Have a Dream” speech to the peace march in Alabama.

Including a timeline and a glossary, this stirring and poignant book is a wonderful introduction to Martin Luther King Jr. and his powerful message of nonviolence.

Angela Farris Watkins, PhD, is the niece of Martin Luther King Jr. She is an associate professor of psychology at Spelman College. Watkins is the author of two children’s books about her uncle published by Abrams Books for Young Readers. She lives in Atlanta.

Eric Velasquez is the illustrator of numerous books for children. He received the Coretta Scott King/John Steptoe Award and won the Pura Belpré Honor for Illustration. He lives in Hartsdale, New York.
Loading...
or
Not Currently Available for Direct Purchase