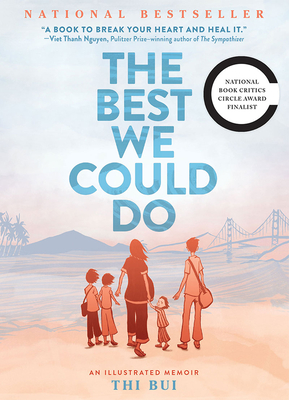 This beautifully illustrated and emotional story is an evocative memoir about the search for a better future and a longing for the past. Exploring the anguish of immigration and the lasting effects that displacement has on a child and her family, Bui documents the story of her family’s daring escape after the fall of South Vietnam in the 1970s, and the difficulties they faced building new lives for themselves.

At the heart of Bui’s story is a universal struggle: While adjusting to life as a first-time mother, she ultimately discovers what it means to be a parent—the endless sacrifices, the unnoticed gestures, and the depths of unspoken love. Despite how impossible it seems to take on the simultaneous roles of both parent and child, Bui pushes through. With haunting, poetic writing and breathtaking art, she examines the strength of family, the importance of identity, and the meaning of home.

In what Pulitzer Prize–winning novelist Viet Thanh Nguyen calls “a book to break your heart and heal it,” The Best We Could Do brings to life Thi Bui’s journey of understanding, and provides inspiration to all of those who search for a better future while longing for a simpler past.

Praise For The Best We Could Do: An Illustrated Memoir…

"Be prepared to take your heart on an emotional roller-coaster journey with this thought-provoking account that completely satisfies as the story comes full circle. Highly recommended for teens and adults; an excellent choice for book clubs."
— Library Journal online (starred review)

"In creatively telling a complicated story with the kind of feeling words alone rarely relay, The Best We Could Do does the very best that comics can do. This is a necessary, ever-timely story to share far and wide.”
— Booklist, starred review

"She does not spare her loved ones criticism or linger needlessly on their flaws. Likewise she refuses to flatten the twists and turns of their histories into neat, linear narratives. She embraces the whole of it… In this mélange of comedy and tragedy, family love and brokenness, she finds beauty."
— Publishers Weekly (starred review)

“The memoir is a detailed family history and an accurate representation of Vietnamese people during the Vietnam war and the realities of finding a better life and a new land.”

Thi Bui was born in Việt Nam three months before the end of the American War, and came to the United States in 1978 as part of the “boat people” wave of refugees from Southeast Asia. Her debut graphic memoir, The Best We Could Do (Abrams ComicArts, 2017), has been selected as UCLA’s Common Book for 2017, a National Book Critics Circle finalist in autobiography, an Eisner Award finalist in Reality Based Comics, and made several Best of 2017 book lists, including Bill Gates’s top five picks. Bui is also the Caldecott Honor-winning illustrator of A Different Pond, a picture book by the poet Bao Phi (Capstone, 2017). Her short comics can be found online at The Nib, Reveal News, PEN America, and BOOM California. She is currently researching and drawing a work of graphic nonfiction about how Asian Americans are impacted by incarceration and deportation, to be published by One World, Random House. Bui taught high school in New York City and was a founding teacher of Oakland International High School, the first public high school in California for recent immigrants and English learners. Since 2015, she has been a faculty member of the MFA in Comics program at the California College of the Arts. Thi Bui lives in the Bay Area.