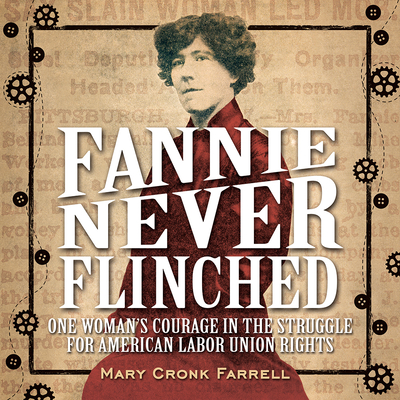 Fannie Sellins (1872–1919) lived during the Gilded Age of American Industrialization, when the Carnegies and Morgans wore jewels while their laborers wore rags. Fannie dreamed that America could achieve its ideals of equality and justice for all, and she sacrificed her life to help that dream come true. Fannie became a union activist, helping to create St. Louis, Missouri, Local 67 of the United Garment Workers of America. She traveled the nation and eventually gave her life, calling for fair wages and decent working and living conditions for workers in both the garment and mining industries. Her accomplishments live on today. This book includes an index, glossary, a timeline of unions in the United States, and endnotes.

Praise For Fannie Never Flinched: One Woman’s Courage in the Struggle for American Labor Union Rights…

"The author may be addressing this stirring story of an early union activist—Fannie Sellins (1872-1919)—to middle-schoolers, but the rigor of her approach yields a book with solid scholarly feature."
— Publishers Weekly

"Readers interested in the history of workers’ rights shouldn’t miss this entrée to the subject, which is bolstered by a timeline of labor struggles, source notes, and other resources."
— Booklist

"A useful resource for students researching the violent era of American labor history."
— Bulletin of the Center for Children's Books

Mary Cronk Farrell’s books have been honored with the SPUR Award for Best Juvenile Fiction, and as Notable Social Studies Books for Young People and NY Public Library Best Books for Teens. Mary speaks at schools, libraries, and women’s and family workshops. She lives in Spokane, Washington.
Loading...
or support indie stores by buying on