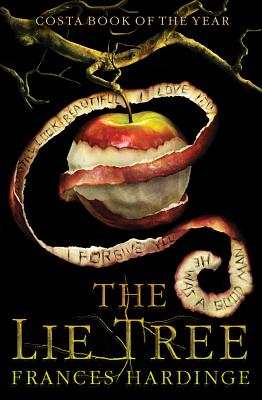 
Faith Sunderly leads a double life. To most people, she is modest and well mannered—a proper young lady who knows her place. But inside, Faith is burning with questions and curiosity. She keeps sharp watch of her surroundings and, therefore, knows secrets no one suspects her of knowing—like the real reason her family fed Kent to the close-knit island of Vane. And that her father’s death was no accident.

In pursuit of revenge and justice for the father she idolizes, Faith hunts through his possessions, where she discovers a strange tree. A tree that bears fruit only when she whispers a lie to it.  The fruit, in turn, delivers a hidden truth. The tree might hold the key to her father’s murder. Or, it might lure the murderer directly to Faith herself, for lies—like fires, wild and crackling—quickly take on a life of their own.


Praise For The Lie Tree…

“Over the last decade or so, Frances Hardinge has joined the ranks of those writers of young-adult fiction, like Philip Pullman, whose approach to fantasy proves so compelling that they quickly develop an adult following, and The Lie Tree is a good demonstration of why this is so… It’s a rather stunning page-turner of a performance, and an excellent introduction to Hardinge’s increasingly important body of work.”
— Locus

"In 19th-century Britain, the study of natural history was reserved for gentlemen. Unlucky enough to be born female, science-minded Faith, the heroine of this dark and captivating period novel, can't hope to follow in her naturalist father's footsteps. Yet when those footsteps lead to his suspicious death, Faith turns her "weakness" into an advantage. Underestimated by everyone, from her father's colleagues to the servants to her own mother, she embarks on an investigation that propels her into the scandal that ruined her father's reputation and entices her to adopt his morally questionable research methods.

"The Lie Tree" shares the rich, cerebral atmosphere and feminist bent of Andrea Barrett's history-of-science-inspired fiction for adults, weaving it all together with gossamer fairy-tale thread. The book's title refers to a plant — Faith's father's secret discovery — that withers in the light and feeds off of lies. Faith believes that reason and logic must hold the explanation to the Lie Tree's puzzling attributes, since, for her, "'magic' was not an answer; it was an excuse to avoid looking for one." Nonetheless, she can't deny that when she whispers untruths into its leaves, things happen: Both the plant and Faith's covert power start to grow.

Hardinge's gorgeous descriptive language is charged with menace and meaning. Lying in bed one night, Faith imagines "her lie spreading silently like dark green smoke, filling the air around the house like a haze, spilling from the mouths of those who whispered and wondered and feared … soaking like mist into waiting leaves, seeping like sap down gnarled slender stems, and forcing itself out into a small, white spearhead of a bud." "The Lie Tree" is a murder mystery that dazzles at every level, shimmering all the more brightly the deeper down into it you go."

**STARRED REVIEW**
"Mystery, magic, religion, and feminism swirl together in Hardinge's latest heady concoction... Hardinge creates a fierce, unlikable heroine navigating a rapidly changing world and does it all with consummate skill and pitch-perfect prose, drawing readers into Faith's world and onto her side and ultimately saying quite a lot about the world. Thematically rich, stylistically impressive, absolutely unforgettable."
— Kirkus

**STARRED REVIEW**
"Hardinge, who can turn a phrase like no other, melds a haunting historical mystery with a sharp observation on the dangers of suppressing the thirst for knowledge, and leaves readers to wonder where science ends and fantasy begins... Smart, feminist, and shadowy, Hardinge’s talents are on full display here."
— School Library Journal

**STARRED REVIEW**
"Hardinge’s characteristically rich writing is on full display—alternately excoriating, haunting, and darkly funny—and the novel also features complex, many-sided characters and a clear-eyed examination of the deep sexism of the period, which trapped even the most intelligent women in roles as restrictive as their corsets."
— Publisher's Weekly

**STARRED REVIEW**
"There is an effortless beauty to Hardinge’s writing, which ranges from frank to profound. Though layered, the plot refuses to sag, driven as it is by mystery, taut atmosphere, complex characters, and Faith’s insatiable curiosity... It is a book in which no details are wasted and each chapter brings a new surprise. Readers of historical fiction, mystery, and fantasy will all be captivated by this wonderfully crafted novel and the many secrets hidden within its pages."

**STARRED REVIEW**
“The elements of the mystery are masterfully keyed to the concerns of the Victorian time period, and its unfolding is handled with a dexterity that never loses sight of the gender problem; the book also directs its light onto matters of faith and doubt, and the issue of lies and truth in the pursuit of science. The excitement and danger, coupled with Faith’s intrepid though morally flawed pursuit of justice, call to mind Hardinge’s Fly by Night (BCCB 9/06); give this to readers unafraid to think disquieting thoughts as they race through a breathtaking, action-packed adventure.”
— BCCB

**STARRED REVIEW**
"Everything in this audacious novel is on the cusp or in limbo, setting up delicious tensions and thematic riches. The time is nineteenth-century England just after Darwin’s theory of evolution has thrown the scientific world into turmoil; the setting is the fictional island of Vane, between land and sea; the main  character is a fourteen-year-old girl caught between society’s expectations and her fierce desire to be a scientist... Hardinge maintains masterful control of the whole complex construct: everything from the sentence level on up to the larger philosophical and political questions. A stunner."
— The Horn Book

“Some of the most beloved science-fiction and fantasy writers, from Madeleine L'Engle to Philip Pullman, began as young-adult authors whose fiction proved so compelling that adult readers embraced it as well, ignoring the line that supposedly separates these audiences. One of the latest such writers is Frances Hardinge.”
— Chicago Tribune

Frances Hardinge is the winner of the Costa Book of the Year for The Lie Tree, one of just two young adult novels to win the major UK literary prize. Known for her beautiful use of language, Hardinge has written many critcally acclaimed novels, including Cuckoo Song, Gullstruck Island, Fly by Night, Verdigris Deep, and Fly Trap. She lives in England. Visit the author at franceshardinge.com.

1. Faith idolizes her father, the Reverend Erasmus Sunderly, a brilliant, forbidding man whose scientific work has brought him renown and, as we soon learn, disgrace. What information does she find out about him through the course of the book, and how does this affect her perception of him?

2. In sharp contrast, Faith considers her mother, Myrtle, shallow and scheming. What is Mrs. Sunderly’s role in the household? How does she explain her actions to her daughter? What do the two learn from each other?

3. The Sunderly family has relocated from Kent to Vane, an isolated island where a scientific excavation is taking place. What sparked their move—overtly and covertly? What elements does the location add to the suspense and mystery of the narrative? How do you think things would have turned out had the Sunderlys stayed in Kent?

4. Reverend Sunderly is both a minister and a natural scientist. How does he attempt to reconcile his religious beliefs with the theory of evolution, as laid out in Charles Darwin’s On the Origin of Species? What does Faith believe?

5. Although The Lie Tree initially appears to be an historical suspense novel, it is the Lie Tree itself—a fantastical, almost mythological invention—that steers it into other territory. What does the Lie Tree represent to each of the characters who knows about it? How does it change those who tend it? What does it do to Faith?

6. By the end of the book, Faith has fought for and achieved acknowledgment of her intellect, as well as her innate bravery; in other words, she is a feminist. What other strong women appear in this book, and how does their strength manifest? What sacrifices have they made to achieve their goals?

7. Which aspects of the book has Frances Hardinge drawn from actual historical record, and which are her own invention? What are the many different genres that she has blended into The Lie Tree?

8. Every major character in the novel has at least one secret – either an important piece of information, or something about themselves that they prefer to conceal. What are those secrets, how do they benefit the characters, and how are they revealed (if, in fact, they are)?