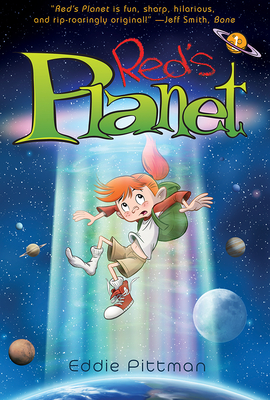 Red’s Planet, an intergalactic graphic novel fantasy series from award-winning cartoonist Eddie Pittman (writer/story artist for Disney’s hit TV series Phineas and Ferb), is a nonstop adventure with a unique cast of characters unlike any you’ve ever seen before.

Meet Red, a quirky, headstrong 10-year-old who longs to live in her own perfect paradise far away from her annoying foster family. But when a UFO mistakenly kidnaps her, Red finds herself farther away than she could have possibly imagined—across the galaxy and aboard an enormous spaceship owned by the Aquilari, an ancient creature with a taste for rare and unusual treasures. Before Red can be discovered as a stowaway, the great ship crashes on a small deserted planet, leaving her marooned with a menagerie of misfit aliens. With her newfound friend, a small gray alien named Tawee, Red must find a way to survive the hostile castaways, evade the ravenous wildlife, and contend with Goose, the planet’s grumpy, felinoid custodian. Surely this can’t be the paradise she’s been hoping for.

Fans of Mike Maihack’s Cleopatra in Space and Ben Hatke’s Zita the Spacegirl will embrace Red’s Planet, a boldly illustrated and imaginative new series for readers of all ages.

"The only thing that's missing is seeing Red's Planet on my bookshelf-- sandwiched between Jeff Smith's Bone and my library of Pixar Films."-- Mike Maihack, Cleopatra in Space

"Red's Planet is a fantastic and fun journey for young readers, but it's also a great trip down memory lane for their parents. The story weaves together a lot of the fun stories we watched  and read in the '80s and '90s and spins them into something new." -- Kazu Kibuishi, creator of Amulet, Flight, and Explorer

"Filled with genuine sense of childlike awe and style of story, art, and filmmaking reminiscent of Jeff Smith's Bone. Eddie Pittman really has the goods." -- Dan Povenmire, co-creator of Disney's Phineas and Ferb

Eddie Pittman is an award-winning cartoonist who works in animation, comics, and illustration. He began his animation career with Walt Disney Feature Animation, working on films such as Mulan, The Emperor’s New Groove, and Lilo & Stitch. Most recently, Pittman was a writer/story artist for Disney’s hit TV series Phineas and Ferb. He lives in Florida. Visit the author online at redsplanet.com.
or support indie stores by buying on
Copyright © 2020 American Booksellers Association