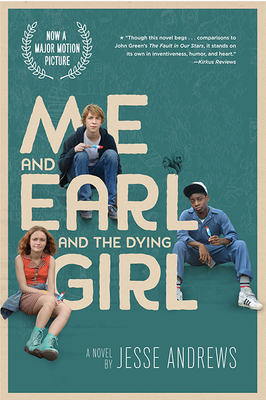 Me and Earl and the Dying Girl (Movie Tie-in Edition)

“This novel of unlikely friendship is a wry, self-effacing, sarcastic read that is impossible to put down. When Greg's (sort of) ex-girlfriend is diagnosed with leukemia, he finds himself prodded into a half-hearted friendship. Enter Earl, Greg's only other friend, a pseudo-thug with a Napoleon complex who curses like a sailor. Of course, friendship blossoms between all three. It's the gems of discovery made by each that make this book so memorable, and it doesn't hurt that it's told with a hilarious, cinematic tone. This is an honest, smart, belly laugh-inducing, tearjerker of a novel.”
— Megan Graves, Hooray for Books!, Alexandria, VA
View the List

**STARRED REVIEW**
“A frequently hysterical confessional...Debut novelist Andrews succeeds brilliantly in painting a portrait of a kid whose responses to emotional duress are entirely believable and sympathetic, however fiercely he professes his essential crappiness as a human being. Though this novel begs inevitable thematic comparisons to John Green's The Fault in Our Stars (2011), it stands on its own in inventiveness, humor and heart.”
— Kirkus Reviews, starred review

**STARRED REVIEW**
“One need only look at the chapter titles (“Let’s Just Get This Embarrassing Chapter Out of the Way”) to know that this is one funny book.”
— Booklist, starred review

"Mr. Andrews' often hilarious teen dialogue is utterly convincing, and his characters are compelling. Greg's random sense of humor, terrible self-esteem and general lack of self-awareness all ring true. Like many YA authors, Mr. Andrews blends humor and pathos with true skill, but he steers clear of tricky resolutions and overt life lessons, favoring incremental understanding and growth."

“It is sure to be popular with many boys, including reluctant readers, and will not require much selling on the part of the librarian."
— VOYA

Jesse Andrews is the New York Times bestselling author of Me and Earl and the Dying Girl and the screenwriter of that book’s Sundance Grand Jury Prize–winning movie adaptation. He’s also the author of The Haters, which Booklist called “effortlessly readable, deeply enjoyable,” in a starred review. He lives in Brooklyn.
Loading...
or support indie stores by buying on