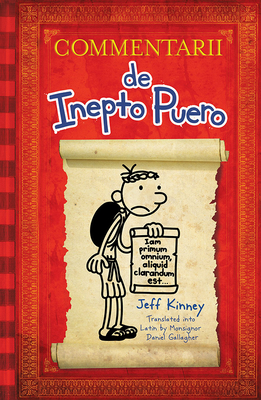 Et tu, Heffley? That’s right, international superstar Greg Heffley is now poised to conquer the classical world with this new Latin edition of the first book in Jeff Kinney’s bestselling Diary of a Wimpy Kid series—translated by Monsignor Daniel Gallagher, a Vatican specialist who translates Pope Francis’s Tweets into Latin. The Wimpy Kid joins beloved characters such as Winnie the Pooh, Harry Potter, the Little Prince, Bilbo Baggins, and the Grinch as the latest in an elite pantheon of children’s books selected for Latin translation. Commentarii de Inepto Puero is sure to appeal to fans of the international bestselling series as well as to readers of all ages studying Latin, either for school credit or for fun.

Monsignor Daniel B. Gallagher, a priest of the Diocese of Gaylord (U.S.A.), is currently assigned to the Office of Latin Letters at the Vatican Secretariat of State. He completed a B.S. and M.A. at the University of Michigan, an M.A. at the Catholic University of America, and a S.T.L. and Ph.D. at the Pontifical Gregorian University. He formerly taught philosophy and Latin at Sacred Heart Major Seminary in Detroit, Michigan. His study of medieval philosophy led to a passion for Latin, which he now teaches at the Paideia Institute for Humanistic Study. Monsignor Gallagher is the editor of the Values in Italian Philosophy series and a regular contributor to the Philosophy and Popular Culture series. His articles have appeared in such journals as Postgraduate Journal of Aesthetics, Josephinum Journal of Theology, Sacred Architecture Journal, Journal for Christian Theological Research, Fellowship of Catholic Scholars Quarterly, Maritain Studies, The Latin Americanist, Social Justice Review, as well as various collected volumes. He is the translator of Vittorio Possenti’s Nihilism and Metaphysics: The Third Voyage (SUNY Press, 2014). Monsignor Gallagher’s latest activities focus on teaching and writing Latin according to the method of his predecessor in the Office of Latin Letters, Fr. Reginald Foster, O.C.D., a mission Gallagher shares with his colleagues at the Paideia Institute for Humanistic Study.
Loading...
or support indie stores by buying on