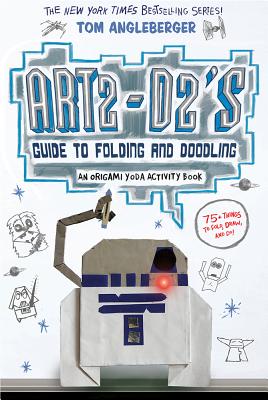 Stick figures to the dark side only lead! To doodle like a Jedi you must learn!

Young Padawan, are you ready to become a Jedi doodler? A galactic knight of origami? Kellen and the kids from McQuarrie Middle School—with some help from Art2-D2—present this guide to mastering over seventy-five activities inspired by the bestselling Origami Yoda series, including doodling, folding, and more.

"Once again, Angleberger’s humor, which presents itself in the text through characters from the series, in both human and origami form, connects with middle-grade readers. 'Art2' and the other 'Origami Yoda' books are the ultimate example of the by-a-fan/for-the-fans format, which succeeds if executed properly. This did he.”
— Florida Times-Union

"Excellent activity-book offshoot of Angleberger’s bestselling Origami Yoda series… The banter and tongue-and-cheek humor of the previous books is present, along with encouragement."
— Publishers Weekly

"Fans (and nonfans, if there are any) of the “Origami Yoda” series and website will find new opportunities aplenty for foolery in this spinoff compendium of progressively challenging hands-on instructions for drawing, folding, and goofing around with (mostly) Star Wars characters."
— School Library Journal

Tom Angleberger is the New York Times bestselling author of the Origami Yoda series and the Flytrap Files series, as well as many other books for kids. He lives with his family in Virginia. Heather Fox is an illustrator of stories for children. When she isn’t creating, she’s probably drinking a hot cup of coffee, eating Chinese food, or chasing down her dog (Sir Hugo) who has stolen one of her socks. She lives in Lancaster, Pennsylvania, with her husband (and author!), Jonathan Stutzman.
Loading...
or support indie stores by buying on
(This book is on backorder)