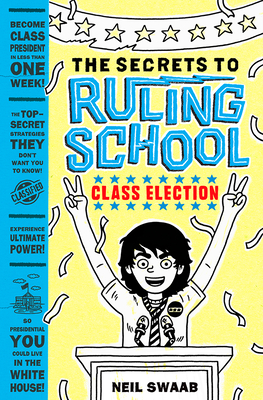 Middle school expert Max Corrigan is back in the second book of this hilarious middle-grade series, and he wants YOU to run for class president. This book by comic artist Neil Swaab, which follows the hit first book, The Secrets to Ruling School, is a perfect read in advance of the 2016 elections and ideal for budding republicans, democrats, and independents.

The competition is fierce, but luckily, you’ve got a killer campaign manager on your side. With Max’s help, you’ll conquer all the steps of running for office and winning votes, including advertisements, endorsements, campaign speeches, and more. Along the way, you’ll learn more essential skills for thriving in middle school, including making a viral video, trading your lunch in the school cafeteria, and putting a positive spin on any situation.

Neil Swaab once again combines comics, kid-friendly humor, and direct-address narrative perfect for reluctant readers in an innovative format reminiscent of video games that is “sure to hit the mark with middle schoolers in the trenches” (Publishers Weekly) and with fans of the Big Nate and Terrible Two series.

"Using second-person narration addressed at the New Kid, Swaab tells the tale between the lines of Max's glib patter and frantic reactions to being outmaneuvered; cartoon line drawings on nearly every page convey side comments and punch lines...Readers who identify with the never-seen New Kid can pat themselves on the back as "you" repeatedly come through in the clutch. Even readers with no political aspirations can pick up several useful cons."
— Kirkus

Neil Swaab is an NYC-based illustrator whose work has appeared in the New York Times, the Utne Reader, the Village Voice, and most recently, James Patterson’s Middle School: My Brother Is a Big, Fat Liar. Swaab has also illustrated posters for Broadway shows and worked on Adult Swim’s Superjail!, Comedy Central’s Ugly Americans, and Cartoon Network’s Annoying Orange. Learn more about Swaab at neilswaab.com.
Loading...
or support indie stores by buying on