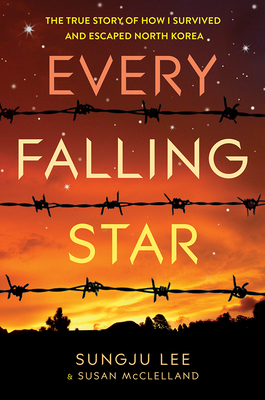 Every Falling Star, the first book to portray contemporary North Korea to a young audience, is the intense memoir of a North Korean boy named Sungju who is forced at age twelve to live on the streets and fend for himself. To survive, Sungju creates a gang and lives by thieving, fighting, begging, and stealing rides on cargo trains. Sungju richly re-creates his scabrous story, depicting what it was like for a boy alone to create a new family with his gang, his “brothers”; to be hungry and to fear arrest, imprisonment, and even execution. This riveting memoir allows young readers to learn about other cultures where freedoms they take for granted do not exist.

Praise For Every Falling Star: The True Story of How I Survived and Escaped North Korea…

"A pampered son of the elite survives a nightmarish ordeal in this page-turner of a memoir... This fast-paced story will likely compel its readers to learn more about North Korea after finishing it."
— Kirkus

"A testament to resilence, Lee's story pulls back the curtain on life in North Korea."
— Publishers Weekly

"Lee provides a summary of the history of Korea and the politics of the famine in North Korea, achieving a great balance between historical context and storytelling."
— School Library Journal

"There are lessons about resilience, friendship, and family to take to heart... The ending satisfies and offers some hope."
— School Library Connection

"[Sungju Lee's] sheer determination rings loudest in this rarely heard perspective. Better yet, the memoir is accessible to younger teens first being exposed to complicated global political and conditions."
— Booklist

"An amazing tale of resilience and an interesting history of an area westerners rarely hear about. "
— VOYA

Susan Elizabeth McClelland’s first book, Bite of the Mango, was a worldwide sensation, published in more than 30 countries. She lives in Toronto, Canada.
Loading...
or
Not Currently Available for Direct Purchase