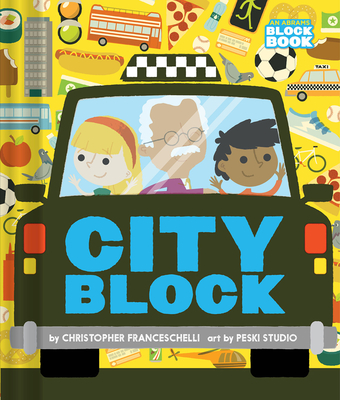 From high up in a skyscraper to far below the ground in the subway, young readers will explore city life in a brand-new way in this fun addition to the Abrams Block Book series! Divided into three sections—things that go, things to see, and things to eat—Cityblock features 24 different aspects of city living. Kids who live in, visit, or dream about New York, Philadelphia, Boston, Chicago, Dallas, St. Louis, Los Angeles, San Francisco, Seattle, and more will love getting to know how cities work from top to bottom.

Like the previous books in the series, Cityblock has die-cut shapes on every spread and durable, interactive fold-out pages, perfect for little hands. Each section opens with a full city scene but gradually focuses in on the small, unique neighborhoods that make the city special.

This clever book will attract young readers living in urban hubs and suburbia alike with its bright, animated, retro-inspired artwork by Peski Studio. This is a must-have book for the little city slicker in your family.

"Children in urban settings will recognize this city's feel, while suburban or rural children will be equally happy to join in the adventure."
— Kirkus

Christopher Franceschelli is a seasoned publisher, editor, and creator of children’s books. He currently runs Chronicle’s Handprint imprint and the SmartInk packaging company. A born and raised New Yorker, Franceschelli lives with his family in Brooklyn. David Partington is an illustrator based in Bristol, UK. His influences range from mid-century design to Saturday morning cartoons. As part of Peski Studio (formerly Peskimo) he enjoys screen printing, a process which often informs his approach to illustration. David’s work can be seen in kids’ books, food packaging, and jumbo floor puzzles around the world. He especially enjoys creating characters, drawing friendly robots, and sending them on incredible adventures.
Loading...
or support indie stores by buying on