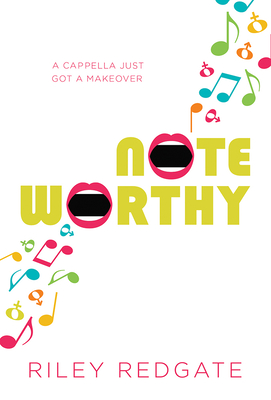 It’s the start of Jordan Sun’s junior year at the Kensington-Blaine Boarding School for the Performing Arts. Unfortunately, she’s an Alto 2, which—in the musical theatre world—is sort of like being a vulture in the wild: She has a spot in the ecosystem, but nobody’s falling over themselves to express their appreciation. So it’s no surprise when she gets shut out of the fall musical for the third year straight. But then the school gets a mass email: A spot has opened up in the Sharpshooters, Kensington’s elite a cappella octet. Worshiped . . . revered . . . all male. Desperate to prove herself, Jordan auditions in her most convincing drag, and it turns out that Jordan Sun, Tenor 1, is exactly what the Sharps are looking for.

**STARRED REVIEW**
"Redgate deftly harmonizes a lighthearted plot with an exploration of privilege, identity, and personal agency... A heart song for all readers who have ever felt like strangers in their own skins."
— Kirkus

"Setting and plot delightfully incorporate the arts, with themes of romance and self-awareness woven in... This fun novel pushes against gender norms and will resonate with many teens."
— School Library Journal

"It is refreshing to read a story about someone dressing as the opposite sex and not have the main tension be about someone finding out... This is not a story of having to hide who you are, but rather a story of finding who you are."
— School Library Connection

"Redgate vividly captures the world of a cappella, and she uses Jordan’s soul-searching—as well as her family’s financial struggles...to bring freshness and substantial depth to a gender-bending/mistaken identity plot that has a long history in literature and theater."
— Publishers Weekly

"Like her visual arts students at Kensington, Redgate crafts her characters with delicate lines and strong shadows within a phase of life that is anything but gentle."
— Shelf Awareness

Riley Redgate is a graduate of Kenyon College in Gambier, Ohio. Her first two novels, Noteworthy and Seven Ways We Lie, earned critical acclaim. She lives and writes in Chicago.
Loading...
or
Not Currently Available for Direct Purchase