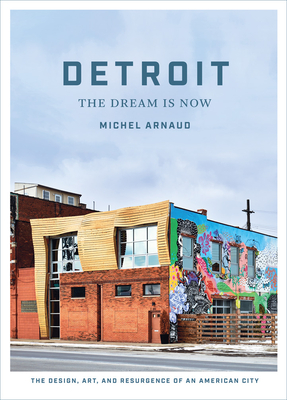 The Dream Is Now: The Design, Art, and Resurgence of an American City

Detroit: The Dream Is Now is a visual essay on the rebuilding and resurgence of the city of Detroit by photographer Michel Arnaud, co-author of Design Brooklyn. In recent years, much of the focus on Detroit has been on the negative stories and images of shuttered, empty buildings—the emblems of Detroit’s financial and physical decline. In contrast, Arnaud aims his lens at the emergent creative enterprises and new developments taking hold in the still-vibrant city. The book explores Detroit’s rich industrial and artistic past while giving voice to the dynamic communities that will make up its future. The first section provides a visual tour of the city’s architecture and neighborhoods, while the remaining chapters focus on the developing design, art, and food scenes through interviews and portraits of the city’s entrepreneurs, artists, and makers. Detroit is the story of an American city in flux, documented in Arnaud’s thought-provoking photographs.

Praise For Detroit: The Dream Is Now: The Design, Art, and Resurgence of an American City…

"Detroit has seen its fair share of challenges, but as Michel Arnaud’s new book, Detroit: The Dream Is Now illustrates, the city is brimming with talent and ingenuity."

“The book strikes a nice balance between long-established Detroiters and the young newcomers who’ve garnered so much recent attention.”
— The Detroit News

“The book is positive and upbeat. While others were focusing on Detroit’s post-industrial decay and ruins, Arnaud decided to shine on a light on the city’s resurgence and growth.”
— Detroit Free Press

Michel Arnaud is an internationally recognized photographer who has worked for publications such as Vogue and Architectural Digest. He is the principal photographer for more than 20 design and lifestyle books, including Design Brooklyn and Detroit. He lives in New York City. Noted architectural curator, Donald Albrecht offers his perspective in the introduction.
Loading...
or support indie stores by buying on