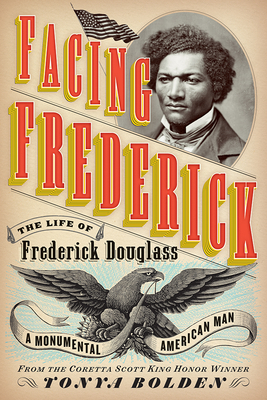 The Life of Frederick Douglass, a Monumental American Man

Frederick Douglass (1818–1895) is best known for the telling of his own emancipation. But there is much more to Douglass’s story than his time spent enslaved and his famous autobiography. Facing Frederick captures the whole complicated, and at times perplexing, person that he was. Statesman, suffragist, writer, and newspaperman, this book focuses on Douglass the man rather than the historical icon.


Praise For Facing Frederick: The Life of Frederick Douglass, a Monumental American Man…

**STARRED REVIEW**
"Most folks know Frederick Douglass as an escaped slave turned abolitionist. Bolden’s insightful, and impeccably researched, biography reveals, instead, a multifaceted man who would travel many paths and constantly redefine himself . . . Bolden’s beautiful, sophisticated narrative demonstrates that throughout all of his responsibilities, Douglass never lost sight of his biggest role—humanitarian."

**STARRED REVIEW**
"This narrative about a well-known figure feels fresh due to Bolden's skilled storytelling . . . A spirited biography that fully honors its redoubtable subject."
— Kirkus Reviews

**STARRED REVIEW**
"Bolden successfully demonstrates in this biography how monumental a figure Frederick Douglass is in U.S. history . . . Bolden adroitly demonstrates the wealth of Douglass’s life and accomplishments with this stellar biography. A must for all nonfiction collections."
— School Library Journal

"Bolden’s signature narrative style, concise and controlled but with a dashes of storyteller panache, allows the big issues to flow easily among the biographical details, making this a strong choice for middle school readers ready to tackle some historical complexity."
— The Bulletin of the Center for Children’s Books

"The text introduces its readers to new documents and scholarship about the once enslaved abolitionist. It’s also compelling to read Douglass’s words in breakout quotes and captions. This is an excellent biography . . ."
— School Library Connection

Tonya Bolden has written numerous bestselling books for children and adults, and her work has garnered many awards, including the Coretta Scott King Honor, James Madison Book Award, School Library Journal Best Book of the Year, and YALSA Best Book of the Year. She lives in New York City. Visit tonyaboldenbooks.com.
Loading...
or
Not Currently Available for Direct Purchase