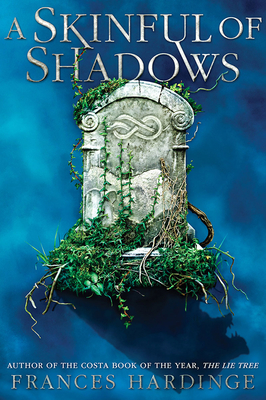 A Skinful of Shadows

Sometimes, when a person dies, their spirit goes looking for somewhere to hide. Some people have space within them, perfect for hiding

Young Makepeace has learned to defend herself from the ghosts that try to possess her in the night, desperate for refuge, but one day a dreadful event causes her to drop her guard. And now there’s a spirit inside her.

The spirit is wild, brutish, and strong, and it may be her only defense when she is sent to live with her father’s rich and powerful family. There is talk of civil war, and they need people like her to protect their dark and terrible family secret. But as she plans to escape and heads out into a country torn apart by war, Makepeace must decide which is worse: possession—or death.

**STARRED REVIEW**
"The visceral immediacy of Hardinge’s prose . . . can sometimes be unsettling, but the prose itself is always original and invigorating"

"?The novel is a very descriptive and craftily written . . . It would be ideal for tenacious students looking for a good ghost story."
— School Library Connection

Frances Hardinge is the winner of the Costa Book of the Year for The Lie Tree, one of just two young adult novels to win the major UK literary prize. Known for her beautiful use of language, Hardinge has written many critcally acclaimed novels, including Cuckoo Song, Gullstruck Island, Fly by Night, Verdigris Deep, and Fly Trap. She lives in England. Visit the author at franceshardinge.com.
Loading...
or
Not Currently Available for Direct Purchase