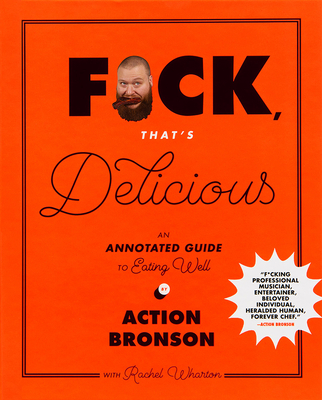 An Annotated Guide to Eating Well


This ain’t no cookbook. This ain’t no memoir. This is Action Bronson’s devotional, a book about the overwhelming power of delicious—no, f*cking amazing—food. Bronson is this era’s Homer, and F*ck, That’s Delicious is a modern-day Odyssey, replete with orgiastic recipes, world travel, siren songs, and weed.

Illustrated, packed with images, and unlike any book in the entire galaxy, Bronson’s F*ck, That’s Delicious includes 40-plus recipes inspired by his childhood, family, tours, and travels. Journey from bagels with cheese that represent familial love to the sex and Big Macs of upstate New York fat camp and ultimately to the world’s most coveted five-star temples of gastronomy. And: the tacos in LA. The best Dominican chimis. Jamaican jerk. Hand-rolled pasta from Mario. Secrets to good eating from Massimo. Meyhem Lauren’s Chicken Patty Potpie. And more! more! more!

“This book is a map of the inside of Bronson’s brain. Starting with his version of Proust’s madeleine, the ‘bagel with cheese,’ and then traveling down the THC-intensified paths of desire to include cheap street foods in the five boroughs of NYC to exotica found on his pilgrimages across the planet . . . This magnificent tome is filled with both the recognizable and the perplexing. And, best of all, I can make it at home and so can you. . . . This is a book that is at once a testament to a wild palate, to a man with a gastronomic vision, to a hip-hop artist of the top of the top category, and a student of life with legendary curiosity. Bronson is the Leonardo da Vinci of pop culture’s multi-cosmic, infinitely overstimulated, twenty-first century children of the handheld devices. At the very same moment all this is swirling around in your head, on your tongue, throughout every single muscle of your dancing, jumping being, you realize . . . F*ck!!! This is delicious.”
— Mario Batali

“If chefs are ‘the new rock stars’ (the Times) and ‘rap is the new rock and roll’ (Kanye West), then the Roger Daltrey of the current moment is a cannonball-shaped thirty-one-year-old rapper from Flushing named Action Bronson.”
— The New Yorker

“Through his career on VICELAND, Bronson has become one of the internet’s most entertaining food personalities—and his book delivers just as much loud enthusiasm for eating fucking delicious things as his show by the same name.”
— GQ magazine

Rachel Wharton is a James Beard Award-winning food writer. Wharton is the author of Edible Brooklyn: The Cookbook and co-author of Korean Home Cooking and F*ck, That’s Delicious with Action Bronson. She lives in New York.
Loading...
or support indie stores by buying on