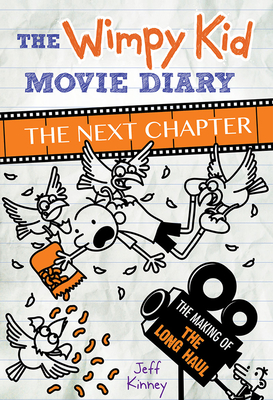 The Next Chapter (Diary of a Wimpy Kid)

Go on a movie-making journey of epic proportions in The Wimpy Kid Movie Diary: The Next Chapter as you hit the road with author and illustrator Jeff Kinney and get a behind-the-scenes look at the making of the 20th Century Fox movie, Diary of a Wimpy Kid: The Long Haul.

Making a movie is a lot like going on a road trip. There are twists and turns and lots of surprises along the way.

Find out what it takes to film a flock of seagulls invading a minivan. Learn about a robot pig and an animatronic three-year-old. And discover everything that goes into making a feature film.

Complete with exclusive set photos, storyboards, and original cartoons by Jeff Kinney, The Wimpy Kid Movie Diary: The Next Chapter is the perfect book for anyone who’s ever wondered how a movie gets made. But buckle up: You’re in for a wild ride!

Jeff Kinney is a #1 New York Times bestselling author of the Diary of a Wimpy Kid series and the Awesome Friendly Kid series. He is a six-time Nickelodeon Kids’ Choice Award winner for Favorite Book and has been named one of Time magazine’s 100 Most Influential People in the World. He spent his childhood in the Washington, D.C., area and moved to New England, where he and his wife own a bookstore named An Unlikely Story.