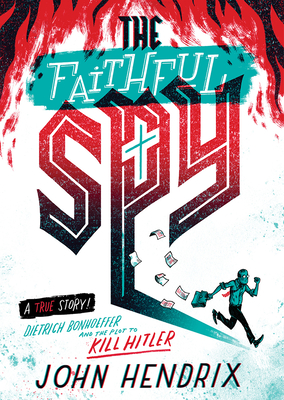 Dietrich Bonhoeffer and the Plot to Kill Hitler


Praise For The Faithful Spy: Dietrich Bonhoeffer and the Plot to Kill Hitler…

**STARRED REVIEW**
"Biographies of key figures from WWII are plentiful in kids books, but Hendrix’s captivating account of the life of Dietrich Bonhoeffer is a standout . . . The combination of Hendrix’s sharp, concise words and evocative artwork gives readers a strong sense of historical context, the enormity of the perilous actions undertaken by Bonhoeffer and other resistance fighters, and the revolutionary nature of his theology of action and civil disobedience. A poignant, compellingly presented, and timely account of a brave individual who lived his life with true conviction."
— Booklist

**STARRED REVIEW**
"The narrative deftly moves between Bonhoeffer’s struggles and Hitler’s ascent. Hendrix’s dynamic images complement the text, using green and red to indicate good and evil. The bold visuals will attract graphic novel fans. An excellent introduction to a great man and his fight for justice."
— School Library Journal

**STARRED REVIEW**
"This book’s inclusion of detailed illustrations, ample use of quotes, and the engaging narrative all contribute to a rich telling of Dietrich Bonhoeffer’s life."
— School Library Connection

"Few historical works for children will proffer the idea that all German Christians during WWII weren’t dyed-in-the-wool Nazis. In an era when nationalism is on the rise in countries across the globe, it is a great good to teach kids about a time when blind and displaced loyalty to a country led to unspeakable evil. Hendrix doesn’t have to spell out the parallels to the times in which we live. Have faith in the kids. They’re going to be able to get there on their own. The author is just laying the facts out before them. He trusts their intelligence. We, the adults, would be wise to do the same.”
— Betsy Bird

"The Faithful Spy should be required reading in high school classrooms around the nation.  One of the best and most original graphic novels of 2018, readers of all ages will be captivated by its exploration of just how extraordinarily brave one pastor must have been to stand up to the Third Reich!  A true story of how one pastor reconciled his faith and his courage to topple the very heart of the Nazi regime, Dietrich Bonhoeffer's life and death stands as a testament that good does indeed triumph over evil."
— Katie Monnin, Director of Education

"Passionate and heartbreaking, Bonhoeffer’s choice (and the ultimate price he paid for collusion) will resonate with young people confronting a turbulent political milieu; Hendrix respects readers’ capacity to rise to a moral challenge."
— The Bulletin of the Center for Children's Books