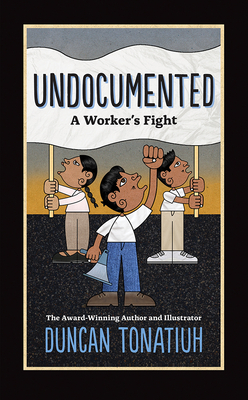 Undocumented is the story of immigrant workers who have come to the United States without papers. Every day, these men and women join the work force and contribute positively to society. The story is told via the ancient Mixtec codex—accordion fold—format. Juan grew up in Mexico working in the fields to help provide for his family. Struggling for money, Juan crosses over into the United States and becomes an undocumented worker, living in a poor neighborhood, working hard to survive. Though he is able to get a job as a busboy at a restaurant, he is severely undercompensated—he receives less than half of the minimum wage! Risking his boss reporting him to the authorities for not having proper resident papers, Juan risks everything and stands up for himself and the rest of the community.


Praise For Undocumented: A Worker's Fight…

“Remarkable…The artwork is deliberately evocative of Mesoamerican logography, with figures and perspectives that feel at once bizarre and totally familiar.”
— Vulture

“By focusing on the narrative of one immigrant worker, Tonatiuh breaks the mammoth issues of immigration and workers rights into an easy-to-swallow bite, allowing the reader to easily engage with an often intimidating topic. The personal is again political. Highly recommended.”
— Kirkus Reviews

“Undocumented... is an all-too-real discussion about fair pay and the hostility U.S. citizens often display toward undocumented immigrants."
— Shelf Awareness

"…a gorgeous, timely, and necessary offering about the daily plight of undocumented workers in the United States.”
— Library Journal

“With its explicit political messages, this book is unique in the picture book canon.”
— NBC online

“From the beginning, the format of this book shows its uniqueness with the codex form used by Mixteco.”
— The News & Observer

Duncan Tonatiuh (toh-nah-tee-YOU) is an award-winning author-illustrator whose numerous accolades include the Sibert Medal and the Pura Belpré Award. Duncan is both Mexican and American. His artwork is inspired by Mesoamerican art. His aim is to create images and stories that honor the past, but are relevant to today’s people, especially children. He grew up in and currently lives in San Miguel de Allende, Mexico, where he celebrates Día de Muertos with his wife and children every year. Learn more at duncantonatiuh.com.
Loading...
or support indie stores by buying on