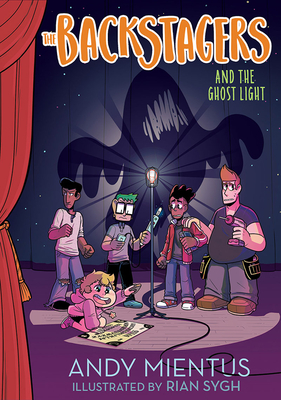 The stage crew at St. Genesius Prep—or Backstagers, as they like to call themselves—are ready for whatever the theater world can throw their way: the madness of tech week, inevitable prop malfunctions, and all the paranormal activity that goes on behind the scenes. Luckily Jory, Hunter, Sasha, Beckett, and Aziz are up for the job!

But lately, someone—or something—seems set on ruining their production of Phantasm. It all started when an actor brought a Spirit Board to the cast party, and the ghost light blew out. Every good theater kid knows that a ghost light must be left on to keep ghosts from moving in the shadows of an empty theater. To figure out what’s haunting the theater and save the show, the Backstagers will have to use their smarts, bravery, and a little bit of magic!

"Fans of the series will appreciate Mientus' exploration of characters' backstories—and all will have a chance to learn more in future prose installments. An adequate dessert for existing fans that just may tempt a few new ones as well."
— Kirkus Reviews

"[Mientus} preserves the spirit and flavor of the comics with hilarious pranks and theater talk, high-energy hustle, and, particularly, in a young cast, notably diverse in ethnic and gender identity, who face personal issues common to everyone . . . as well as the odd supernatural threat."
— Booklist

Andy Mientus is an actor, singer, and songwriter who is known for his roles in Spring Awakening, Wicked, and Les Misérables on Broadway and Smash and The Flash on television. He's also the author of three Backstagers novels, which are based on the BOOM! comics. He lives in New York City.

Rian Sygh is a comic artist and cocreator, along with James Tyrion IV, of the award-winning Backstagers comics. He lives in Glendale, California.
Loading...
or
Not Currently Available for Direct Purchase