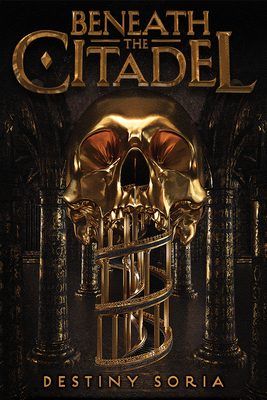 In the city of Eldra, people are ruled by ancient prophecies. For centuries, the high council has stayed in power by virtue of the prophecies of the elder seers. After the last infallible prophecy came to pass, growing unrest led to murders and an eventual rebellion that raged for more than a decade.  In the present day, Cassa, the orphaned daughter of rebels, is determined to fight back against the high council, which governs Eldra from behind the walls of the citadel. Her only allies are no-nonsense Alys, easygoing Evander, and perpetually underestimated Newt. Cassa struggles to come to terms with the legacy of rebellion her dead parents have left her, and the fear that she may be inadequate to shoulder the burden. But by the time Cassa and her friends uncover the mystery of the final infallible prophecy, it may be too late to save the city—or themselves.


Praise For Beneath the Citadel…

"The premise, based around "infallible prophecies," raises interesting questions about free will . . . This is a thrilling adventure story."
— Kirkus Reviews

"This tale of friendship, political intrigue, power, and love is a delight. Soria (Iron Cast, 2016) gives readers characters to invest in, and a situation to trigger conversation without the overblown, overinvolved writing of some fantasies."
— Booklist

"The four protagonists are drawn in strong lines, their personalities bold and distinct with some swoony romance between the two boys and welcome diversity regarding body shape and sexuality . . . readers will be able to follow the twists and turns through to the satisfying conclusion."
— The Horn Book

"Get lost in this strange, dark world where a really smart girl and her friends may save the future, or the past."
— School Library Connection

"The diverse characters—including those who are bisexual, asexual, and gay—have rich backgrounds; many scenes, especially those set on and around a creepy underground lake, are harrowing; and the emotional finale is truly shocking. Fans of dark, character-driven fantasy will find much to enjoy in this novel by Soria (Iron Cast), which raises interesting questions about fate, free will, and sacrifice."
— Publishers Weekly

“The unique fantasy world, featuring divination and the erasure of memories, poses some compelling questions about agency . . . the witty rapport of the teens in the face of foreseen dangers and uncertain outcomes pairs quick laughs with fast-paced action.”
— The Bulletin of the Center for Children's Books

Destiny Soria graduated from Samford University with a BA in English. For seven months, she backpacked across New Zealand, supporting herself as a travel writer and tour guide in a haunted prison. She now lives and works in Birmingham, Alabama. Iron Cast is her debut novel.
Loading...
or
Not Currently Available for Direct Purchase