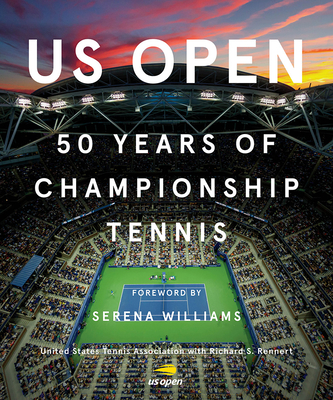 Timed to coincide with the US Open’s 50th anniversary, this exquisitely produced book celebrates the most electrifying event in tennis. All of the key moments and unforgettable personalities from the competition’s 50-year history are brought to life by vibrant, exclusive photography. This book provides a comprehensive look at the tournament, from the early years of tennis legends such as Billie Jean King and Arthur Ashe to iconic players such as Roger Federer and Serena Williams. Original contributions from journalists, players, coaches, and notable fans stand alongside gorgeous photography of the many household names who have made their mark competing on the game’s biggest stage. A perfect gift for any tennis fan, this book is a richly visual tribute to the sport, its fans, and its champions.

Richard S. Rennert is the director of publishing at the United States Tennis Association, which is America’s governing body for the sport of tennis. Rennert is also the author of The Open Book: Celebrating 40 Years of America’s Grand Slam. He lives in New York.
Loading...
or support indie stores by buying on