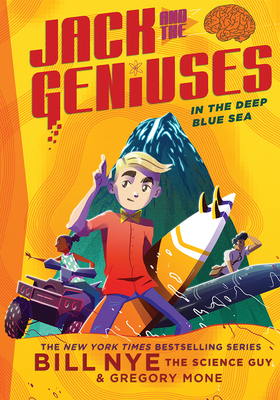 In the Deep Blue Sea

Jack and the Geniuses Book #2

Jack and his siblings hit the high seas to solve the mystery of a sabotaged renewable energy project in another thrilling adventure in this New York Times bestselling series from Bill Nye and Gregory Mone!

Jack and his genius siblings, Ava and Matt, embark on an adventure with Dr. Hank Witherspoon to the remote Hawaiian island home of Ashley Hawking, a technology billionaire. Hawking and engineer Rosa Morris have built a revolutionary electricity plant that harvests energy from the ocean’s depths, but someone has sabotaged the project.

In his search for the culprit, Jack ventures 2,000 feet below the surface of the ocean in a homemade submarine. He, Ava, and Matt attend the world’s strangest birthday party, face off against an arrogant young genius, and then find themselves lost at sea. The three siblings have to use all their brainpower and cunning to find out who’s behind the sabotage . . . and survive.

Gregory Mone is the author of several bestselling works of fiction and nonfiction for both children and adults. He is a contributing editor at Popular Science and an award-winning science writer. A graduate of Harvard College, he lives with his family on Martha’s Vineyard.
Loading...
or support indie stores by buying on