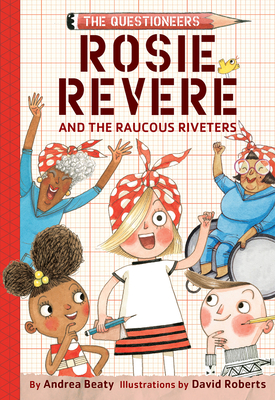 Rosie Revere and the Raucous Riveters

This is a unique and exciting series of children’s chapter books for children, parents, and teachers who want to make STEM (Science, Technology, Engineering, and Math) fun.

Rosie Revere is no stranger to flops and fails, kerfuffles and catastrophes. After all, engineering is all about perseverance! But this time, Rosie has a really important project to tackle—one that feels much bigger than herself.

Rosie’s beloved Aunt Rose and her friends, the Raucous Riveters—a group of fun-loving gals who built airplanes during World War II—need help inventing something new. And Rosie is just the engineer for the job! After one flop . . . then another . . . and another . . . Rosie starts to lose hope. But thanks to some help from her fellow Questioneers Iggy Peck and Ada Twist, Rosie gets the job done.

And, along with the Riveters, Rosie rediscovers the meaning of home.

Praise For Rosie Revere and the Raucous Riveters: The Questioneers Book #1…

"The duo behind the bestselling STEAM-based picture book series that introduced engineer Rosie Revere, architect Iggy Peck, and scientist Ada Twist turns the kids into a team, “the Questioneers,” in a spirited chapter book series opener."

"Rosie places an emphasis on not being afraid of failure, and if she ever gets carried away by excitement or doubt, she must "STOP AND THINK!" The strength of this series is in the positive portrayal of diverse kids engaging in various arts and sciences."—Booklist

"Readers will be engaged throughout this charming fictional story, and enjoy saying the silly sounds while learning about engineers and perseverance."—School Library Connection

Andrea Beaty is the author of Iggy Peck, Architect; Rosie Revere, Engineer; and Ada Twist, Scientist; among other children’s titles. She lives just outside Chicago. David Roberts has illustrated many children’s books, including Iggy Peck, Architect and Rosie Revere, Engineer. He lives in London where, when not drawing, he likes to make hats.
Loading...
or support indie stores by buying on