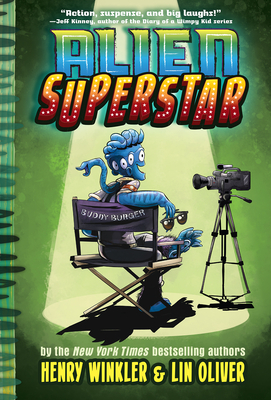 No one is shocked by the six-eyed alien strolling around the Universal back lot. The tourists just think he’s part of the show. It doesn’t take long for Buddy to land a role on a popular TV show, playing (of course) an alien. He becomes an overnight heartthrob and is suddenly faced with legions of adoring fans, rides in glamorous limos, and appearances at “all-the-shrimp-you-can-eat” red carpet parties. But can Buddy maintain his secret identity while in the spotlight?

“A Hollywood adventure that’s truly out of this world! Alien Superstar has it all... action, suspense, and big laughs!”
— Jeff Kinney, author of the Diary of a Wimpy Kid series

"Henry Winkler and Lin Oliver keep us laughing while slipping in a lesson for kids--accept everyone as they are, even if they have suction cups for feet. Alien Superstar is a super fun read for middle grades on up."
— Jennifer Garner

"Sci-fi lovers will find Winkler’s new book completely out of this world. . . A funny interstellar adventure that will have readers watching the cosmos for the second book to arrive."
— SLJ Review

"Winkler and Oliver bring their sharply honed sense of comedy and extensive experience in the television industry to Buddy’s antics on the set . . .  This results in an endearingly strange protagonist that will resonate with any kid who has felt like an outsider. A sense of humor and empathy are required for this zany adventure."
— Booklist