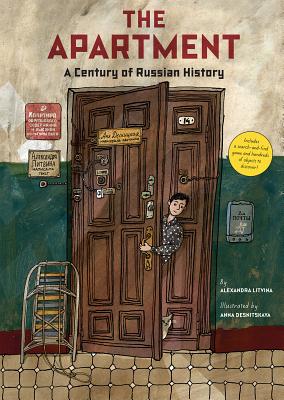 A Century of Russian History

The Apartment: A Century of Russian History explains the true history of 20th-century Russia through the fictitious story of a Moscow family and their apartment. The Muromtsev family have been living in the same apartment for more than a century, generation after generation. Readers are taken through different rooms and witness how each generation actually lived alongside the larger social and political changes that Russia experienced. A search-and-find element has readers looking for objects from page to page to see which items were passed down through the generations. Beautifully illustrated with minute details, this book helps readers engage with Russia’s history in an all new way. The book includes a timeline, glossary, bibliography, and index.

Praise For The Apartment: A Century of Russian History…

Alexandra Litvina studied at Moscow State University and at the Gorky Institute of World Literature in Moscow. She has written a number of history books for children. She lives in Russia.

Anna Desnitskaya is an author and illustrator who has been nominated for a number of awards, including the Astrid Lindgren Memorial Award, which is the world’s largest award for children’s and young adult literature. She lives in Russia.

Antonina W. Bouis is one of the leading translators of Russian literature working today and was called the best literary translator by Publishers Weekly. She lives in New York City.
Loading...
or support indie stores by buying on