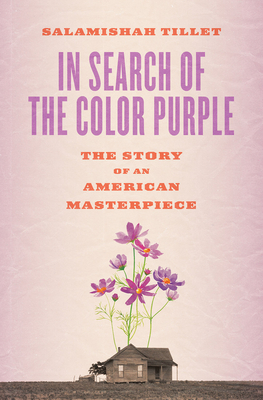 In Search of The Color Purple

The Story of an American Masterpiece (Books About Books)

Alice Walker made history in 1983 when she became the ﬁrst black woman to win the Pulitzer Prize and the National Book Award for The Color Purple. Published in the Reagan era amid a severe backlash to civil rights, the Jazz Age novel tells the story of racial and gender inequality through the life of a 14-year-old girl from Georgia who is haunted by domestic and sexual violence.

Prominent academic and activist Salamishah Tillet combines cultural criticism, history, and memoir to explore Walker’s epistolary novel and shows how it has inﬂuenced and been informed by the zeitgeist. The Color Purple received both praise and criticism upon publication, and the conversation it sparked around race and gender still continues today. It has been adapted for an Oscar-nominated ﬁlm and a hit Broadway musical.

Through archival research and interviews with Walker, Oprah Winfrey, and Quincy Jones (among others), Tillet studies Walker’s life and how themes of violence emerged in her earlier work. Reading The Color Purple at age 15 was a groundbreaking experience for Tillet. It continues to resonate with her—as a sexual violence survivor, as a teacher of the novel, and as an accomplished academic.

Provocative and personal, In Search of The Color Purple is a bold work from an important public intellectual, and captures Alice Walker’s seminal role in rethinking sexuality, intersectional feminism, and racial and gender politics.

Praise For In Search of The Color Purple: The Story of an American Masterpiece (Books About Books)…

“Salamishah does what only great writers of literary criticism accomplish—she tells a story about a masterpiece without forgetting the extraordinary woman who crafted it and the legions of women made whole because of her work. A bold and vital tale that rightly treats Alice Walker’s American classic as if it were a living, breathing being demanding our utmost attention and enduring affection.”
— Janet Mock

“We need reminders of the stories that have brought us over, the hymns and spirituals and freedom songs our people sang. The Color Purple is such a hymn. Alice Walker is its composer. And Salamishah Tillet, our conductor, lines this hymn for us, beautifully, so that we might all show up, text in hand, and sing its chorus, in tribute to the genius, care, and love of Alice Walker.”
— Brittney Cooper

“This book is a stunning act of devotion, a literary and personal excavation of one of the great novels of American literature, The Color Purple. Salamishah Tillet deepens and refreshes our understanding of the novel, movie, and Broadway play, reminds us of the fraught history of the novel’s publication, shows us how it has moved and transformed generations, and reveals how the controversial issues of sex, race, and gender are still as relevant and controversial today as they were then. Salamishah has allowed this extraordinary work of fiction to guide and heal her life, and her book does the same for us.”
— Eve Ensler

“The Color Purple is my all-time favorite film, hands down. The book is also one of my favorites, but watching the movie has particularly, over time, become a healing balm—almost a spiritual practice. Salamishah Tillet’s book is a beautiful tribute to The Color Purple, and a gift to those of us who are deeply connected to it. For others less tied to the stories of Celie, Shug, and Sofia, it is a history lesson and cautionary tale of what happens when a Black woman attempts to tell her truth publicly; something to be studied and learn from. This will be a necessary companion for all who engage with this story for years to come.”
— Tarana Burke

“One of my most cherished possessions is a copy of The Color Purple, signed by Alice Walker and dated October 22, 1991. In case of fire, I keep it near my family photos to make sure it is not left behind. In Search of The Color Purple delivers extraordinary insight into both the love and the struggle that made Ms. Walker’s exquisitely crafted novel a masterpiece. After reading Salamishah Tillet’s poignant book, neither readers nor writers will forget that it takes courage and audacity to write a novel that tells the reality of women’s lives.”
— Anita Hill

“An enriching study for the novel’s many devoted readers.”
— Kirkus

“Tillet comes to a deeper understanding of the novel, Walker, and herself in this revelatory and memorable blend of biography, autobiography, and insightful homage to a literary icon.”
— Booklist

“…Salamishah Tillet continues the decades-long tradition of Black women unearthing other Black women’s literature…In this continuous act of unearthing, Black women have helped each other breathe easier, see farther, and believe more deeply in the possibility of a world that cherishes their mundane, striking, broken, and full selves.”
— VICE

“...a journey of uncovering and rediscovering how this beautiful tale was conceived, birthed, and has thrived for nearly four decades.”
— Elle

“Tillet writes a necessary account of how Walker’s centering the lives of Black women has transformed literature. Accessibly written, this book will engage both longtime fans and those new to Walker’s writing.”

“Tillet delves into the backstory of the novel, explores why Walker’s book continues to resonate, and explains how the literary work became a cultural phenomenon, all while masterfully weaving together personal, cultural, and historical conversations about the text…”

“This is a gripping and many-layered account of Walker’s life and her literary inspirations that continue to inspire subsequent generations and influencers, not least members of the #MeToo movement with its focus on addressing sexual and gender-based violence... an enthralling and emotional read.”
— New York Journal of Books

Salamishah Tillet is a scholar, cultural critic, and activist. A professor at Rutgers University–Newark and previously a professor of English and Africana Studies at the University of Pennsylvania, she is a contributing critic-at-large for the New York Times. With her sister, she cofounded A Long Walk Home, a Chicago-based national nonprofit that uses art to empower young people to end violence against girls and women. She lives in New Jersey.

1. How does The Color Purple assist Tillet on her path to healing the effects of the sexual violence she endured?

2. Tillet states that The Color Purple “helped birth” the Me Too movement. How are the book and the movement, though decades apart, connected?

3. Why do some members of the various Black communities feel that the Black writer’s political responsibility is to ensure that Black literature presents only positive imagery?

4. How do works of fiction influence readers’ versions of reality?

5. What aspects of Celie, Shug, and Sofia’s “way of being in the world” could be defined as feminist/womanist?

6. Tillet places Walker along a continuum of Black writers that include Richard Wright and Amiri Baraka. Why is Walker’s reclamation of the genius of Zora Neale Hurston so significant to this continuum and to her work?

7. Some critics believe that Walker’s novel had racist images of Black men. What stereotypes were they referring to and why did they think the novel reproduced them?

8. During the early era of the blues, many of the female vocalists were bisexual or lesbian, who, despite the constraints of living in a sexist, homophobic society, held a kind of freedom. How does Shug exemplify this?

9. Tillet shares Sofia’s fate after she “rebuffs attempts by the mayor’s white wife, Millie, to pet her children and hire her as a maid. After becoming frustrated by Sofia’s refusal of her offer, Millie enlists her husband to punish Sofia… .The tragic scene ends with the sheriff [and] a group of white men, pistol-whipping and beating Sofia on the ground.” How is this scene similar to the “weaponizing” use of public servants, such as elected officials and police officers, by some white women against Black people?

10. In her afterword, Walker’s close friend Beverley Guy-Sheftall quotes from Walker’s journal, “It has been black men (as well as black women and Native Americans) who have provided in this culture the most inspiring directions for everyone’s freedom. As a daughter of these men, I did not hear a double standard when they urged each person to struggle to be free, even if they intended to impart one. When Malcolm said, ‘Freedom, by any means necessary,’ I thought I knew what he meant. When Martin said, ‘Agitate nonviolently against unjust oppression,’ I assumed he also meant in the home, if that’s where the oppression was.” How does Walker writing The Color Purple fit within, or even expand, Malcolm and Martin’s conceptions?

11. The author has a strong and enduring bond with the original text when she first reads it as a teenager. Is there a book that has affected you the same way?

12. Both Tillet and her interview subject, Oprah Winfrey, responded so strongly to The Color Purple because of their own histories with sexual violence. What about The Color Purple or the environment in which it was published do you think made the book speak so powerfully to them?

13. How do you think the researching and writing of the book affected Tillet as she touches on in the text? Did you have a similar reaction to reading it?