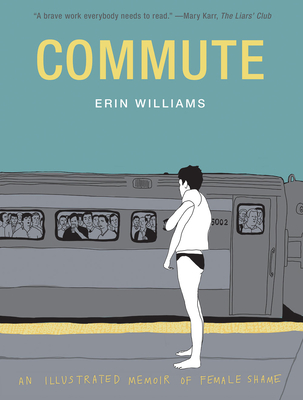 An Illustrated Memoir of Female Shame

An intimate, clever, and ultimately gut-wrenching graphic memoir about the daily decision women must make between being sexualized or being invisible

In Commute, we follow author and illustrator Erin Williams on her daily commute to and from work, punctuated by recollections of sexual encounters as well as memories of her battle with alcoholism, addiction, and recovery. As she moves through the world navigating banal, familiar, and sometimes uncomfortable interactions with the familiar-faced strangers she sees daily, Williams weaves together a riveting collection of flashbacks. Her recollections highlight the indefinable moments when lines are crossed and a woman must ask herself if the only way to avoid being objectified is to simply cease to draw any attention to her physical being. She delves into the gray space that lives between consent and assault and tenderly explores the complexity of the shame, guilt, vulnerability, and responsibility attached to both.


Praise For Commute: An Illustrated Memoir of Female Shame…

"Williams does not shy away from her shame. She is also angry, and she knows she is not alone, and that brilliant anger is where the book becomes truly great. Her confidence—and literal straight gaze at the reader, full of vulnerability and challenge—makes this volume a critique, a lament, and a sigh. As Williams elegantly argues, many women need all three. This sharp and splendidly drawn memoir will strike a strong chord in the current moment. "
— Publishers Weekly, Starred Review

“One day’s commute offers time for the author to reflect on sexual predators, alcoholism, and the experiences she understands better now than she did at the time…A catharsis for the author that fits perfectly within a pivotal period for society and culture at large.”
— Kirkus Reviews

"...[Williams] adds an eloquent voice to the chorus of stories testifying to the daily experiences of women under patriarchy. Commute is a book that really should be read by everyone."
— BookPage, Starred Review

“Williams is as unapologetic in this book as she is vulnerable, which makes for a unique, timely, and powerful read.”

“This is welcoming, soul-baring, stunningly interconnected, and very discussable.”
— Booklist

Erin Williams is a writer, illustrator, and researcher living in New York. She’s the coauthor of The Big Fat Activity Book for Pregnant People and The Big Activity Book for Anxious People.
Loading...
or support indie stores by buying on