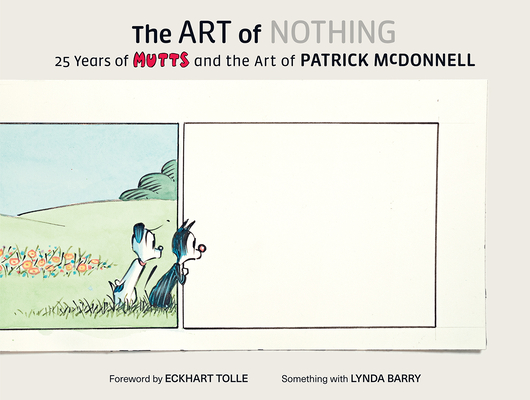 The Art of Nothing

25 Years of Mutts and the Art of Patrick McDonnell

Timed for the 25th anniversary of the comic strip Mutts, The Art of Nothing celebrates the work of author and illustrator Patrick McDonnell

Mooch, the curious cat, and Earl, the ever-trusting dog, are just two of the characters who inhabit the world of Mutts. In The Art of Nothing: 25 Years of Mutts and the Art of Patrick McDonnell, the award-winning author and illustrator’s beloved comic strip is celebrated as well as his bestselling children’s classics, including Me . . . Jane, The Gift of Nothing, South, Just Like Heaven, Hug Time, and Wag!, all shot from the original art. Also included are rare and never-before-seen artwork, proposals, outtakes, and developmental work, along with autobiographical commentary, a brand-new, career-spanning interview conducted by artist Lynda Barry, and an introduction by Eckhart Tolle (The Power of Now and A New Earth: Awakening to Your Life’s Purpose).


Praise For The Art of Nothing: 25 Years of Mutts and the Art of Patrick McDonnell…

“Patrick McDonnell’s book is a singular work of art, a giddy, gorgeous treasure, which I will wear out studying and learning from.”
— Jules Feiffer

"Patrick McDonnell is a compassionate champion for all animals, particularly dogs and cats, and through his comic strip, Mutts, he captures magically the personalities of some of our best friends."
— Jane Goodall

"Patrick McDonnell's Mutts is up there with Peanuts, Pogo, Krazy Kat, and Calvin and Hobbes—cartoons that are smart, funny, brilliantly drawn, and full of heart."
— Matt Groening

"One of the best comic strips of all time."
— Charles M. Schulz

"There is a simplicity to Patrick McDonnell's work that is as delightful as it is deceptive."
— Eckhart Tolle, from his foreword

Patrick McDonnell is the bestselling author, illustrator, playwright, painter, and creator of the comic strip Mutts, which appears in over 700 newspapers around the world. He has received numerous awards internationally, including the Reuben, the highest honor given by the National Cartoonists Society. He lives in New Jersey.
Loading...
or support indie stores by buying on
(This book is on backorder)