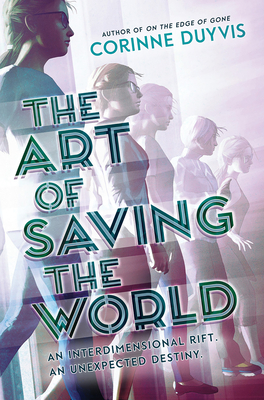 The Art of Saving the World

When Hazel Stanczak was born, an interdimensional rift tore open near her family’s home, which prompted immediate government attention. They soon learned that if Hazel strayed too far, the rift would become volatile and fling things from other dimensions onto their front lawn—or it could swallow up their whole town. As a result, Hazel has never left her small Pennsylvania town, and the government agents garrisoned on her lawn make sure it stays that way. On her sixteenth birthday, though, the rift spins completely out of control. Hazel comes face-to-face with a surprise: a second Hazel. Then another. And another. Three other Hazels from three different dimensions! Now, for the first time, Hazel has to step into the world to learn about her connection to the rift—and how to close it. But is Hazel—even more than one of her—really capable of saving the world?

Praise For The Art of Saving the World…

"Duyvis’ rich, layered character development—grounded in Hazel’s raw, first-person perspective—offers an authentic exploration of questioning sexuality and asexuality, what makes us who we are, and what our responsibilities are to ourselves and to others."
— Booklist

"This is a fast-paced adventure story with the perfect mix of fantasy and coming-of-age realistic fiction."
— School Library Journal

"The representation of mental health issues is at times so painfully accurate that the novel becomes difficult to read but at the same time, impossible to put down."
— Kirkus Review