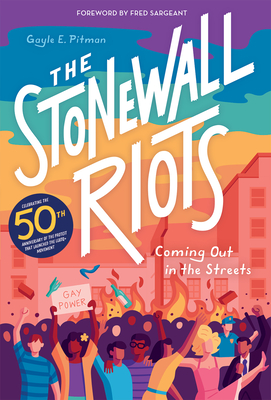 Coming Out in the Streets

This book is about the Stonewall Riots, a series of spontaneous, often violent demonstrations by members of the gay (LGBTQ+) community in reaction to a police raid that took place in the early morning hours of June 28, 1969, at the Stonewall Inn in the Greenwich Village neighborhood of Manhattan, New York City. The Riots are attributed as the spark that ignited the LGBTQ+ movement. The author describes American gay history leading up to the Riots, the Riots themselves, and the aftermath, and includes her interviews of people involved or witnesses, including a woman who was ten at the time. Profusely illustrated, the book includes contemporary photos, newspaper clippings, and other period objects. A timely and necessary read, The Stonewall Riots helps readers to understand the history and legacy of the LGBTQ+ movement.


Praise For The Stonewall Riots: Coming Out in the Streets…

**STARRED REVIEW**
"With meaningful content delivered in an innovative format, The Stonewall Riots deserves to be required reading for people of all ages."
— Shelf Awareness

"A substantive look at a key moment in the history of the LGBTQIAP-equality movement."
— Kirkus Reviews

"Pitman’s fresh storytelling brings emotion and depth to the history of a movement and the establishment that served as an epicenter for social change."
— Publishers Weekly

"The narrative is presented through a series of "objects": photographs of places, people, or items, such as a police officer's nightstick, a parking meter, a matchbook, or a protest leaflet. Though each object only reveals a small part of the story, together they reveal a powerful picture and offer rich historical context . . . [An] inviting, engaging, and well-researched approach to history."
— Booklist

"In brief chapters themed around objects and places associated with the run-up, aftermath, and three days of rioting, readers get a credible reconstruction of events and the context with which to frame it."
— The Bulletin of the Center for Children's Books

"An important look at a major moment in American history. Readers will come to understand why the iconic Stonewall Inn is now on the National Register of Historic Places, a National Historic ­Landmark, and a National ­Monument."
— School Library Journal

Gayle E. Pitman, PhD, is a professor of psychology and women and gender studies at Sacramento City College. Her research, teaching, and writing focus heavily on gender, sexual orientation, intersectionality, and social justice. Her first children’s book won the 2015 ALA Stonewall Award. She lives in Rio Linda, California.
Loading...
or support indie stores by buying on