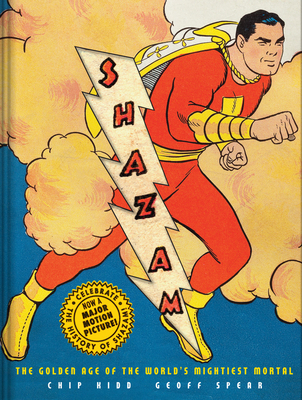 The Golden Age of the World's Mightiest Mortal

Shazam made his debut in Whiz Comics in 1940, and outsold his biggest competitor, Superman, by 14 million copies a month. It wasn’t long before a variety of merchandise was licensed—secret decoders, figurines, buttons, paper rockets, tin toys, puzzles, costumes—and a fan club was created to keep up with the demand. These collectibles now sell for outrageous prices on eBay and in comic book stores and conventions. Seventy years later, an unprecedented assortment of these artifacts are gathered together by award-winning writer/designer Chip Kidd and photographer Geo Spear. Join Kidd, Spear, and the World’s Mightiest Mortal in this first, fully authorized celebration of ephemera, artwork, and rare, one-of-a-kind toys, and recapture the magic that was Shazam!

Geoff Spear shot all the photography for Batman Collected, Batman Animated, Bat-Manga!, Peanuts: The Art of Charles M. Schulz, and Mythology: The DC Comics Art of Alex Ross. His award-winning photographs have appeared regularly in Vogue, Entertainment Weekly, GQ, Newsweek, and the New York Times, and on numerous book covers.
Loading...
or support indie stores by buying on
(This book is on backorder)