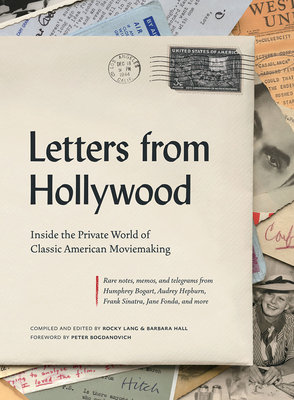 Inside the Private World of Classic American Moviemaking

Letters from Hollywood reproduces in full color scores of entertaining and insightful pieces of correspondence from some of the most notable and talented film industry names of all time—from the silent era to the golden age, and up through the pre-email days of the 1970s. Culled from libraries, archives, and personal collections, the 135 letters, memos, and telegrams are organized chronologically and are annotated by the authors to provide backstories and further context. While each piece reveals a specific moment in time, taken together, the letters convey a bigger picture of Hollywood history. Contributors include celebrities like Greta Garbo, Alfred Hitchcock, Humphrey Bogart, Frank Sinatra, Katharine Hepburn, Marlon Brando, Elia Kazan, Cary Grant, Francis Ford Coppola, Tom Hanks, and Jane Fonda. This is the gift book of the season for fans of classic Hollywood.


Praise For Letters from Hollywood: Inside the Private World of Classic American Moviemaking…

"This is, quite simply, one of the finest books I’ve ever read about Hollywood."
— Leonard Maltin

Rocky Lang is an author who has produced, written, and directed motion pictures, documentaries, and television programs.

Barbara Hall is an independent film historian who was an archivist and oral historian at the Academy of Motion Picture Arts and Sciences. She also worked in the archives at Warner Bros. They both live in Los Angeles.