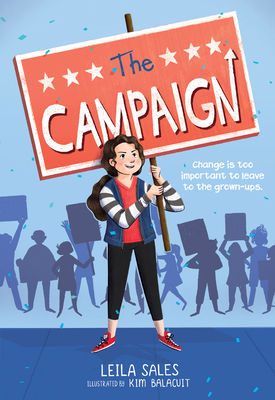 For 12-year-old Maddie Polansky, the only good part of school is art class. And though she’s never paid much attention to politics, when she learns that the frontrunner for mayor of her city intends to cut funding for the arts in public schools, the political suddenly becomes very personal. So Maddie persuades her babysitter, Janet, to run for mayor against Lucinda Burghart, art-hating bad guy. Soon, Maddie is thrust into the role of campaign manager, leading not only to humor and hijinks, but to an inspiring story for young readers that talks about activism and what it takes to become an engaged citizen. Maddie and Janet’s adventures on the campaign trail are illustrated by copious black-and-white drawings throughout the book.


Praise For The Campaign…

"The Campaign is exactly the story we need right now. A fun middle grade tale celebrating both why . . . and how . . . we should be involved in our government."—Jon Scieszka, bestselling author and national ambassador for children's literature emeritus

“A hilarious, inspiring story which proves that kids have the vision and the power to change the world.”—Max Brallier, New York Times bestselling author of The Last Kids on Earth series

"A timely book encouraging youth to get involved."—Kirkus Review

"Sales seamlessly weaves campaigning facts and ethics into the timely tale, educating readers while keeping them hooked on the suspenseful election." —Publishers Weekly

Leila Sales is the author of six novels, including This Song Will Save Your Life and Once Was a Time. She is also the editor of many award-winning and bestselling books for kids and teens. She lives in Austin, Texas, and travels often to speak about writing and children’s books. Kim Balacuit is an illustrator and designer who studied animation and illustration at Montclair State University. She lives in Rutherford, New Jersey, and is fond of animals, banana bread, and long road trips.
Loading...
or support indie stores by buying on