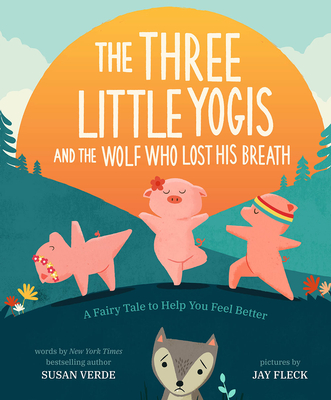 The Three Little Yogis and the Wolf Who Lost His Breath

Once upon a time there lived a wolf who lost his huff and his puff. It was a BIG, BAD problem! One morning, the wolf came upon a peaceful little yogi doing sun salutations. The wolf wanted to huff and puff and blooow her hut down into a big pile of straw. But instead the yogi suggested, “Let’s meditate on that!”
Soon the wolf met a second yogi, and then a third. He may have lost his huff and puff—but with the help of three new yogi friends, can the wolf find his breath?


Praise For The Three Little Yogis and the Wolf Who Lost His Breath: A Fairy Tale to Help You Feel Better (Feel-Good Fairy Tales)…

"Adults may find this story useful in teaching children how to deal with strong emotions, and children will enjoy trying out the various positions and modes of breathing."
— Booklist

"Perfect to read one on one or in a group to help children (and adults) find their inner peace and power of breath."
— School Library Journal

Susan Verde is a New York Times bestselling children’s author, children’s yoga and mindfulness expert, former teacher, and parent. By 2022 she will have more than 20 picture books in the marketplace. She is a highly sought after speaker at conferences, festivals, and schools across the nation, and spends half the year on the road working with children and families. Verde is a frequent contributor to online magazines and has appeared on multiple podcasts speaking about writing, parenting, mindfulness, and yoga. She lives in East Hampton, New York.

Jay Fleck drew a lot as a child but grew up to pursue other things, such as a degree in computer engineering. He found a renewed interest in art while living in Chicago, inspired by the art and culture found throughout the city. Jay is the author-illustrator of Tilly & Tank and the illustrator of a number of other children's books. He now resides in a suburb south of Chicago with his wife, two children, and loyal dog, Otis. He spends his spare time running, reading, and daydreaming.
Loading...
or support indie stores by buying on