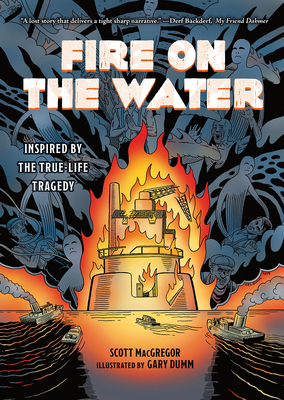 Fire on the Water

This original graphic novel imagines the lives of blue-collar workers involved in the real-life Lake Erie tunnel disaster of 1916 in Cleveland. Author Scott MacGregor and illustrator Gary Dumm tell the intersecting stories of a brilliant African American inventor, Ben Beltran (based on the real-life Garrett Morgan, Sr.), desperate immigrants tunneling beneath Lake Erie, and corrupt overseers who risk countless lives for profit. As historical fiction, Fire on the Water sheds light not only on one of America’s earliest man-made ecological disasters but also on racism and the economic disparity between classes in the Midwest at the turn of the century.

Praise For Fire on the Water…

“A plucky tale of survival and heroism.”
— Publishers Weekly

“…compellingly utilizes biographical elements, political machinations, corruption, humor, and even light touches of fantasy to weave a nuanced tapestry about the richness of human experience under the most trying circumstances.”
— Library Journal

"A powerful vision that exposes the far-reaching impacts of greed and oppression."
— Booklist

"...a story that feels contemporary in its confluence of environmental disregard, racism and economic inequality."
— Cool Cleveland

Scott MacGregor has been writing comic book stories for over 30 years. This is his first full-length graphic novel. He lives in Cleveland, Ohio. Gary Dumm is a lifelong resident of Cleveland and an artist who worked extensively with Harvey Pekar on American Splendor. Dumm’s cartoons have also appeared in Entertainment Weekly, the New York Times, the Village Voice, and Le Monde.

Paul Buhle is a senior lecturer in the American Civilization and History departments at Brown University. He has written and edited thirty-five books, including Jews and American Comics, and lives in Rhode Island.
Loading...
or
Not Currently Available for Direct Purchase