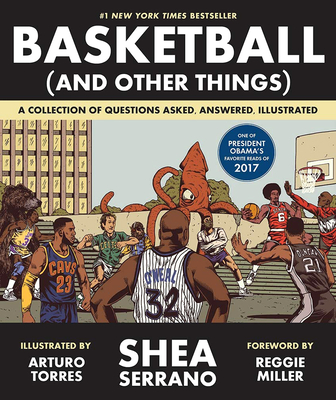 Basketball (and Other Things)

Any fan of Shea Serrano’s unconventional, hilarious, and insightful writing will want to add this hardcover edition of his wildly popular Basketball (and Other Things) to their collection. The book will feature a new cover and two new chapters as well as a removable basketball card that showcases Serrano’s trademark creativity and Arturo Torres’s inimitable illustration style. First released as a paperback in 2017, the book went on to become a #1 New York Times bestseller. This edition will be a keepsake for Serrano fans and basketball fans alike.

Praise For Basketball (and Other Things): A Collection of Questions Asked, Answered, Illustrated…

“Shea Serrano’s new book… is a hilarious, informative group of passages that answer questions you never realized needed to be asked."
— Slam Magazine

"Shea Serrano's Basketball (And Other Things) is equal parts hilarious and enlightening... this is the ultimate book on basketball fandom.”
— NPR

“Cleverly written and beautifully illustrated… It's a must for any basketball fan.”

“Even if you’re a basketball novice or die-hard Spurs fan like Shea, this is a perfect companion to his Rap Year Book: full of myths, what-ifs, and hyperspecific fanaticism.”
— Vulture

“The sports-obsessed teen will definitely love this (even if they don’t read any other books).”
— Travel + Leisure

“An original work that captures the spirit of basketball.”
— Library Journal

"All of the musings—the book spans 240 pages and is comprised of 33 chapters—is playfully illustrated by Arturo Torres and serves as a reminder that although basketball fans may get all riled debating GOAT status and greatest teams, the NBA, at its core, is just plain fun."
— Hoop Magazine

“The questions Serrano asks and answers (and that Arturo Torres illustrates in engaging graphic-novel style) includes many barstool argument-starters ("Who's the Greatest Dunker in NBA History?," "What Year Was Michael Jordan the Best Version of Michael Jordan?") as well as some nerdily conceptual ones.“

“The game’s impact and influence on everything from fashion to young POC kids’ work ethic is undeniable and some, like Shea Serrano, have always been attuned to that.”

“The game’s impact and influence on everything from fashion to young POC kids’ work ethic is undeniable and some, like Shea Serrano, have always been attuned to that.”
— Remezcla

Shea Serrano is an award-winning writer, author, and illustrator. His most recent book, The Rap Year Book, reached the bestseller lists of the New York Times and Washington Post, topped the Arts and Entertainment iBooks bestseller list, and was named one of Billboard’s Best 100 Music Books of All Time. Currently, Serrano is a staff writer for The Ringer. He lives in Houston, Texas.
Loading...
or support indie stores by buying on