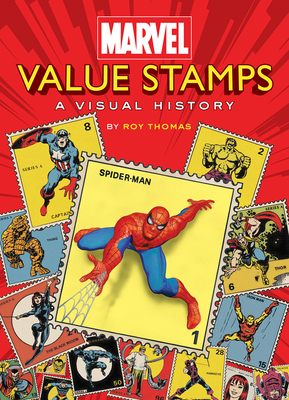 The story of the most inspired comic book promotional campaign of all time, collected here for the first time

In 1974, Marvel Comics publisher Stan Lee devised an ingenious promotional campaign—Marvel Value Stamps, which appeared on the letters pages of their monthly comics. Readers could cut out all 100 of these super hero and super villain stamps and place them in a special mail-order booklet. Once complete, these stamp books could then be redeemed for special discounts and exclusive merchandise. The program was so successful, a second set was released in 1975. And now, for the first time, these original stamp books, stamps, and all of the surrounding ephemera and source material are collected into one must-have volume for collectors and fans, along with text from Marvel Comics historian Roy Thomas.

Roy Thomas has been a comic book writer and editor since 1965, primarily for Marvel Comics and DC Comics. Inducted into the Will Eisner Comic Book Hall of Fame in 2011, he currently edits Alter Ego magazine, writes the online Tarzan strips, and the occasional comic book. Thomas is also the author of two definitive histories for Taschen—75 Years of Marvel Comics: From the Golden Age to the Silver Screen and The Stan Lee Story. He lives in rural South Carolina.