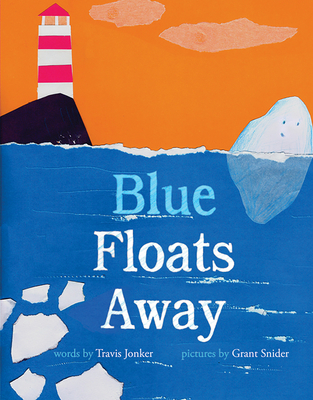 Little Blue lives at the North Pole with his parents until, one day, he floats away and strikes out on his own. Along the way, Blue encounters new things (sharks) and beautiful things (sailboats). He starts to wonder which way is home when something unexpected starts to happen. Little Blue is getting smaller and smaller until . . . he transforms!
After mixing with the warm ocean water, Blue reappears as a cloud. He encounters new things (airplanes) and beautiful things (birds). He charts a course for home. As it gets colder and colder, Blue gets bigger and bigger until . . . hey, is that a snowflake?
A story about the water cycle, Blue Floats Away explores the power of transformation and growing up.


Praise For Blue Floats Away…

**STARRED REVIEW**
"Animating the water cycle is a project that Jonker (The Very Last Castle) takes on with humor, drama, and even momentary twinges of fear. Though an author’s note discusses climate change, the story’s message also comforts, with a character who doesn’t disappear but gracefully changes state."
— Publishers Weekly

"Jonker keeps his text and its tale simple, accommodating the youngest audiences and providing a clear framework for the educational component. Charming and effective."
— Booklist

"Charming, child-friendly illustrations in cut paper, colored pencil, and white ink convey the journey of a young iceberg and the wondrous beauty and variety of vistas along the way."
— School Library Journal

"A title that sneakily teaches as it enchants."
— Shelf Awareness

Travis Jonker is an elementary school librarian and the creator of 100 Scope Notes, a kidlit blog hosted by School Library Journal. He was a member of the 2014 Caldecott committee. Jonker lives with his wife and two children in Zeeland, Michigan. Visit him online at 100scopenotes.com. Grant Snider is an orthodontist by day and an artist by night. He is the author-illustrator of graphic novels and picture books, including What Color Is Night? His comics have been featured in many major publications, including the New York Times, and The New Yorker, as well as The Best American Comics 2013 anthology. He lives in Wichita, Kansas, with his wife and four children. Visit him online at incidentalcomics.com.

Grant Snider is an orthodontist by day and an artist by night. He is the author of The Shape of Ideas and I Will Judge You by Your Bookshelf, along with several picture books for young readers, including Blue Floats Away by Travis Jonker. His comics have been featured in the Kansas City Star, the New York Times, and the New Yorker, as well as The Best American Comics 2013 anthology. He lives in Wichita, Kansas, with his wife and five children. Visit him online at incidentalcomics.com.
Loading...
or support indie stores by buying on